Lange has led a department-wide volunteer day at Crossroads of Michigan since 2015. 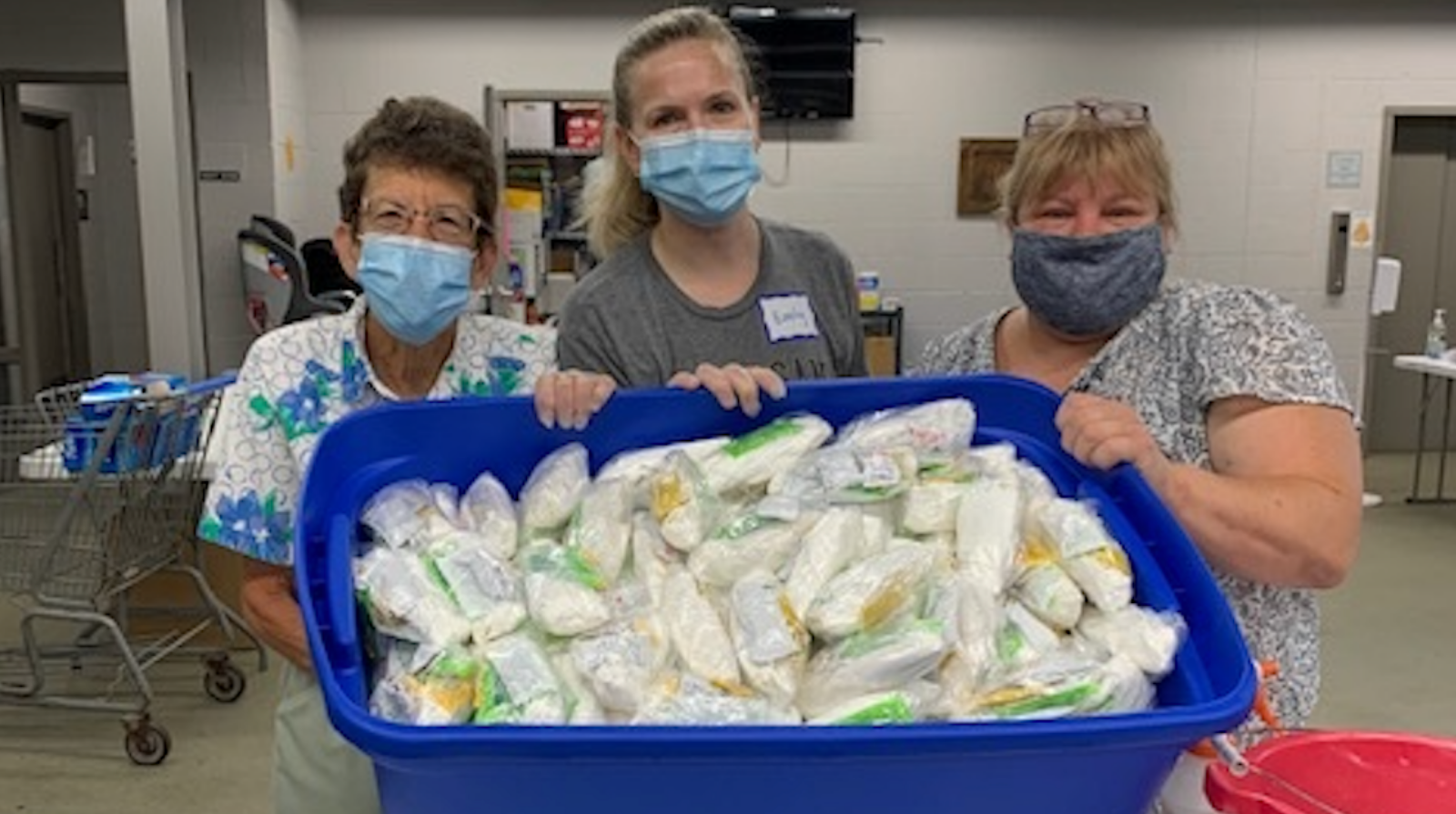 Crossroads of Michigan has a special place in Sara Lange’s, CRNA, heart.

She first volunteered at Crossroads — one of seven soup kitchens in Detroit and the only one open every Sunday — with her church in 1989. She met her husband there when both were serving as volunteers and later organized an annual day of service with her CRNA colleagues at Beaumont Health.

So when she joined the Michigan Medicine (then University of Michigan Health System) Department of Anesthesiology in 2014, she was grateful for the opportunity to bring the tradition of service with her.

“When I came to Michigan Medicine, I found the department to be filled with energetic and generous people — just what was needed for a successful day at Crossroads,” Lange says.

The department’s first event in December 2015 included a hat, mitten, and scarf drive for those served by Crossroads. “One of my favorite pictures from Crossroads is an elderly client from that Sunday, in his new mad bomber hat and scarf, donated by Anne Eggers, CRNA,” Lange says. “The joy on his face was radiating.”

Since then, Lange has led efforts annually to sponsor a day of volunteering at Crossroads. Department colleagues have donated money for groceries — volunteers provide the food on the day they serve — and hygiene items and have baked thousands of homemade cookies to add a personal touch to the meal. Donations in excess of those needed for the meal have supported Crossroads’ children’s summer lunch program and food pantry.

Responding during a pandemic 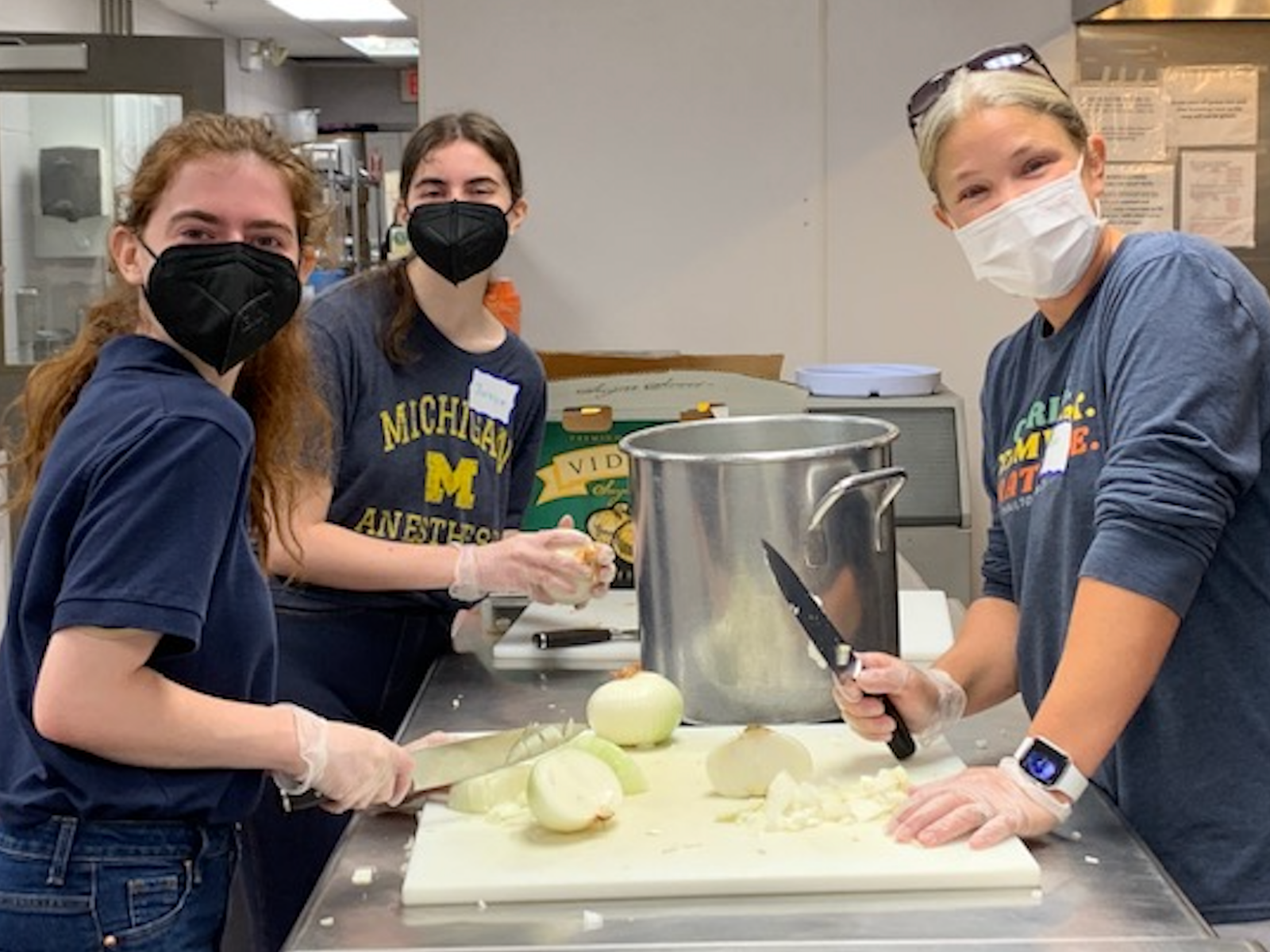 When the pandemic hit last year, Lange knew the need for volunteers would continue in some capacity.

“COVID-19 certainly changed all of our lives over the past year and half,” she says. “One constant throughout all of this, though, is the plight of some of the neediest in Detroit.” That’s true of the organizations that serve them as well.

Like many organizations across the state, Crossroads shut their doors last year for the first time in the organization’s history. They were closed from mid-March to mid-May.

“Some long-term clients of the soup kitchen were not seen after reopening in May,” Lange says. “It was felt that many of the homeless in Detroit were hit hard by COVID. Limited resources of PPE, inability to social distance in the shelters, and poor access to health care took its toll.”

Prior to closing, Lange says the organization served 600-700 clients every Sunday. Now, those numbers are down approximately 35-40 percent. Department volunteers served 225 meals in 2020 and 280 meals this year.

With fewer meals to serve and social distancing guidelines in place, Lange needed fewer volunteers over the past two years. Even still, department colleagues responded with generosity. This year, volunteers donated more than $5000, providing additional funding for programs throughout the year. 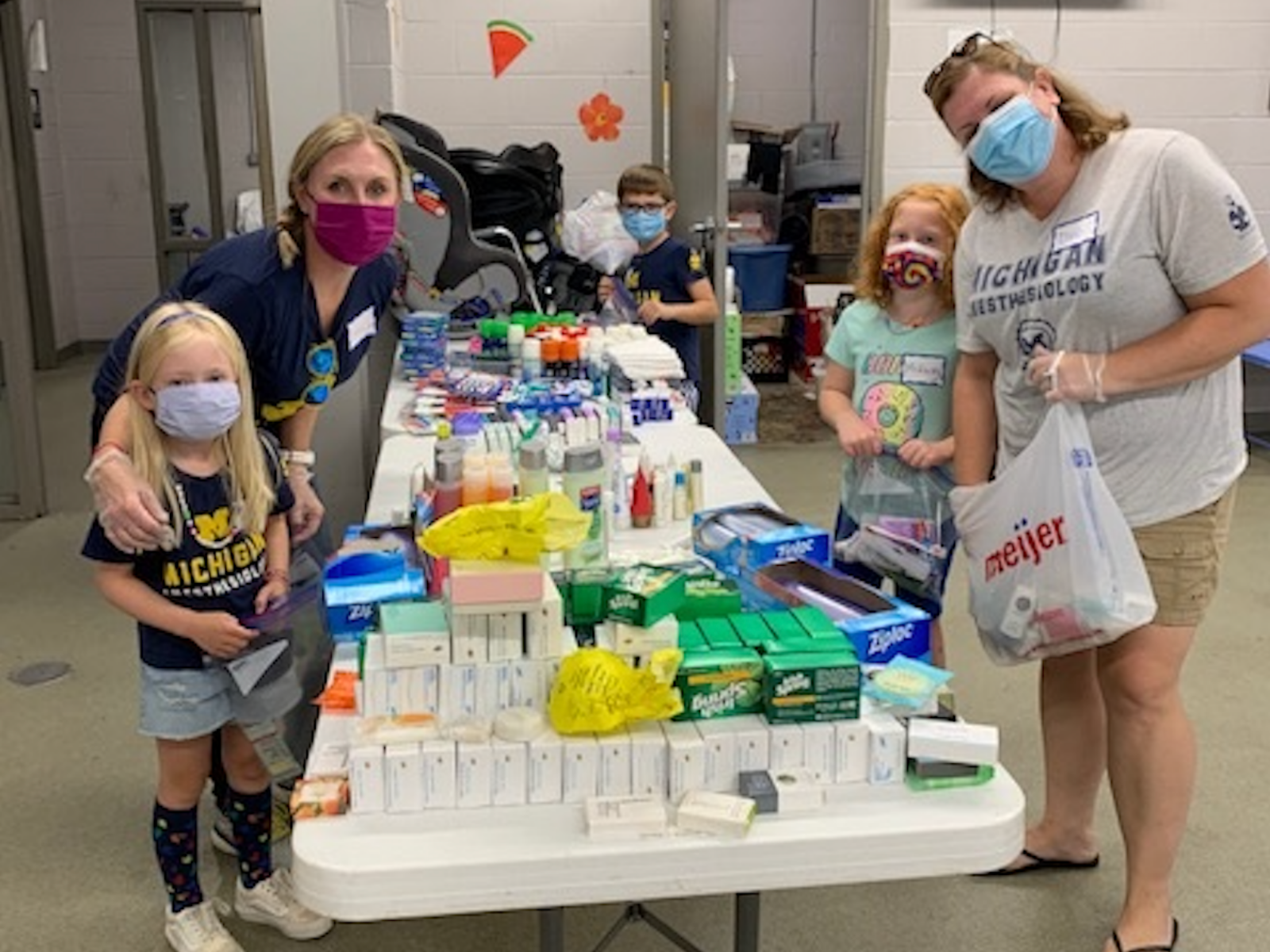 Taking the mission to heart

Year after year, Lange finds herself encouraged by the outpouring of support from colleagues. She’s also noticed that some volunteers have found ways to connect with the organization throughout the year — like Marlena Stankiewicz, CRNA, who volunteers to hand out clothing throughout the year, or Renee Chulski, CRNA, who has baked several lifetime’s worth of cookies for Crossroads clients.

For others, like Rita Fakhoury, CRNA, and Laurie Heline, CRNA, volunteering has become a family affair. Fakhoury and her family have delivered holiday gifts and school supplies to Crossroads; while Heline began volunteering with her daughter and now brings her husband and his sons with her every year.

“It’s heartwarming to see the response I get from all different people in our department,” Lange says. “It doesn’t matter what your job is with Michigan Medicine Anesthesia, there is always a way to participate.”

Lange is looking forward to continuing the tradition next year, which is already scheduled for Sunday, May 15; but, as she begins to think about phasing out of her anesthesia career, she’s ready to pass the torch to another volunteer. If you are interested in becoming a co-chair for the event, please reach out to Lange for more information.