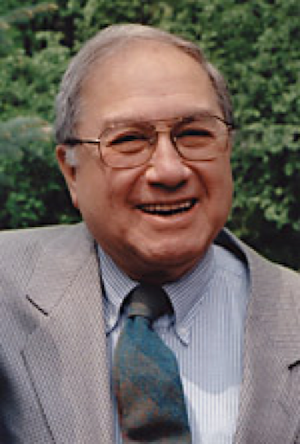 Dr. Greenberg had an exceedingly successful scientific career spanning six decades and several disciplines. While at Case Western Reserve, he pioneered the use of radioactive compounds to elucidate the pathway for the biosynthesis of purines, one of two types of bases comprising RNA and DNA. In 1957, shortly after coming to Ann Arbor, he was awarded the prestigious American Chemical Society Paul Lewis Award in Enzyme Chemistry. Soon after his arrival at the University of Michigan, Dr. Greenberg refocused his research on bacteriophage T4, a bacterial virus that infects E. coli and reprograms the cell to synthesize a new type of viral DNA. Dr. Greenberg soon became a leader in the field of molecular biology and spent the remainder of his career identifying and characterizing enzymes and enzyme complexes involved in T4 DNA synthesis. He continued research on the T4 ribonucleotide reductase for many years as an emeritus faculty member. Dr. Greenberg is well-known for his pioneering studies on the molecular biology of bacteriophage T4 and for elucidating the purine biosynthetic pathway.

In addition to Dr. Greenberg’s passion for research, he was very enthusiastic about teaching. Dr. Greenberg was a mentor to many graduate students and postdoctoral fellows and was lauded by his trainees for helping them launch their academic and scientific careers. Even as an emeritus faculty member, Dr. Greenberg was involved in teaching the Biological Chemistry 711 student seminar course.

Dr. Greenberg is survived by his wife of nearly 40 years, Susan Jiga Greenberg, and six children. Dr. Greenberg was a visionary scientist and teacher and a valued colleague and friend. We thank Mrs. Greenberg for establishing the G. Robert Greenberg Lecture in Biological Chemistry, and we also thank his former trainees for their contributions to this lectureship.