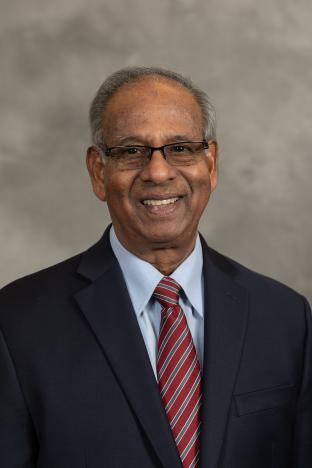 Professor Menon received his B.Sc. degree (with first class honors in chemistry) from the University of Bombay in 1959 and his B.Sc. (Tech) degree from the Department of Chemical Technology, University of Bombay in 1962. He was a graduate student in the laboratory of Dr. Ralph I. Dorfman at the Worcester Foundation for Experimental Biology and received his Ph.D. degree from Boston University in 1967. He then joined the laboratory of Dr. Michael Smith at the University of British Columbia, Vancouver as a postdoctoral fellow working in the area of molecular biology from 1967–70. He joined the University of Michigan faculty as an assistant professor in 1970, and was promoted to associate professor in 1975, and professor in 1981. He served as the interim chair (1990–91) and associate chair (1993–96) of the Department of Biological Chemistry. He also served as director of the Department of Obstetrics and Gynecology's Division of Research from 1994–2015. Professor Menon retired from active faculty status in 2019.

Professor Menon developed a vigorous research program in the area of mechanism and regulation of steroid hormone biosynthesis in the ovary, structure/function studies of the luteinizing honnone receptor, LH regulated signal transcription, and RNA-binding protein-mediated post transcriptional regulation of the LH receptor. His research was continuously funded by the NIH throughout his faculty career at Michigan. Professor Menon's main grant from the NIH was continuously funded for 41 years and he received an NIH MERIT Award in 2002. He published over 200 papers in peer-reviewed journals and edited four books. He served on numerous editorial boards and NIH study sections as well as the VA MERIT grant review panel. Professor Menon taught medical students, undergraduates, and graduate students throughout his tenure. He received the University of Michigan's Distinguished Faculty Achievement Award (1999), the Impression 5 Science Museum's Michigan Scientist of the Year Award (2006), and the Medical School's Endowment for Basic Sciences Teaching Award in Biochemistry (2010), and was inducted into the Medical School's League of Research Excellence (2014).