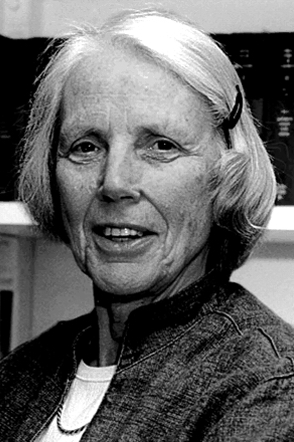 Dr. Martha L. Ludwig, the J. Lawrence Oncley Distinguished University Professor of Biological Chemistry at the Medical School and Senior Research Professor in the Biophysics Research Division, was born on August 16, 1931, and was raised in Pittsburgh, PA. In 1952, she received an undergraduate degree in chemistry at Cornell University and in 1955, her master's degree in chemistry from the University of California, Berkeley. In 1956, Dr. Ludwig received a Ph.D. in Biochemistry at Cornell's Medical College. She passed away on November 27, 2006.

Dr. Ludwig held postdoctoral positions at MIT and Harvard. While at Harvard, Dr. Ludwig worked with J. Lawrence Oncley and Margaret Hunter and continued lifelong collaborations with them while at the University of Michigan. She did further postdoctoral training with future Nobel laureate William Lipscomb, with whom she solved the structure of carboxypeptidase A. This was the first structure of a protein to be determined in the United States, and this work launched Dr. Ludwig as a rising star in the field of x-ray crystallography.

In 1967, Dr. Ludwig joined both the Department of Biological Chemistry as an assistant professor and the Biophysics Research Division as an assistant research biophysicist. She served as Chair of the Biophysics Research Division from 1986–89 and initiated the Molecular Biophysics Training Program at the University of Michigan. Professor Ludwig was a stellar x-ray crystallographer, and her research is nationally and internationally recognized for its contributions to our understanding of the B vitamins and their mode of action. She served as a mentor and teacher for many younger crystallographers, and her teaching was known for its rigor and depth as well as for its ability to challenge the student. Martha was one of the most accomplished faculty members in the history of the Department of Biological Chemistry. She was a member of the National Academy of Sciences and was elected to the Institute of Medicine in 2006. Dr. Ludwig was a fellow of the American Association for the Advancement of Science (AAAS) and received the Distinguished Faculty Achievement Award from the University of Michigan in 1986. Her husband of 45 years, Frederic Hoch, Professor Emeritus of Internal Medicine and Biological Chemistry, passed away in 2014. All those whose lives she touched will remember Professor Ludwig as an inspiration and visionary.