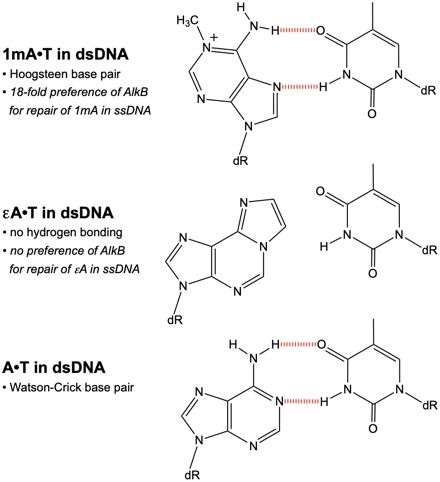 AlkB is a bacterial iron- and 2-oxoglutarate-dependent dioxygenase that repairs a wide range of alkylated nucleobases in DNA and RNA as part of the adaptive response to exogenous nucleic acid alkylating agents. Researchers in the O'Brien lab used quantitative kinetic approaches to determine the transient kinetics of recognition and repair of alkylated DNA by AlkB. These experiments revealed that AlkB is a much faster alkylation repair enzyme than previously reported and that it is significantly faster than DNA repair glycosylases that recognize and excise some of the same base lesions. Whereas 1-methyladenine (1mA) is preferentially repaired by AlkB in single-stranded DNA, 1,N6-ethenoadenine (εA) is repaired with similar efficiencies in both single- and double-stranded DNA. This difference in the importance of strand context for the 1mA and εA substrates may be due to differences in their base pairing with T in double-stranded DNA: hydrogen-bonding interactions between 1mA and T must be broken before AlkB can flip 1mA into its active site, but the absence of hydrogen-bonding interactions between εA and T makes the energetic barrier for flipping εA into the active site less dependent on strand context.