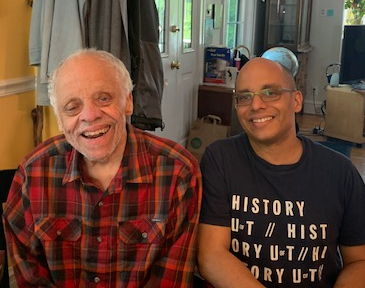 It is with great sadness that we announce the passing of Harvey James Whitfield, M.D., who was a faculty member in the Department of Biological Chemistry from 1970 to 1984. The following obituary was kindly provided by the family of Dr. Whitfield:

Harvey James Whitfield, M.D., biochemist, researcher, educator and psychiatrist, died on July 3, 2021, at his home in Evanston, IL, at the age of 81. The cause was Alzheimer’s disease.

Harvey, known to family and friends as “Skipper”, was born in Chicago, IL, on April 10, 1940, to Harvey James Whitfield, Sr., a urologist who was the first Black attending physician at Michael Reese Hospital, and Kate Matthews Whitfield, the first female Black pharmacist to be licensed in Illinois.

Harvey graduated from Hyde Park High School in Chicago where he played drums and often jammed with Herbie Hancock.

Harvey attended the University of Illinois at Urbana-Champaign for both undergraduate and medical school, graduating with an MD in 1964. Following his internship year in Chicago, he had a postdoctoral fellowship at the National Institutes of Health (NIH) in Bethesda, Maryland. He simultaneously held the position of Senior Assistant Surgeon with the US Public Health Service from 1965–1969. Harvey then spent a further fellowship year at the National Cancer Institute Microbial Genetics Research Unit in Edinburgh, Scotland. He later described his year in Scotland as one of the happiest of his life.

From 1970 to 1984, he was a professor in the Department of Biological Chemistry at the University of Michigan Medical School. At Michigan, he was one of the few African American faculty members, and won the Distinguished Service Award from Black Undergraduates and the Distinguished Faculty Teaching and Service award. Known for his kind and helpful demeanor, he influenced hundreds of students who became deeply attached to him.

In 1983, Harvey returned to the NIH. During this period, he decided to pursue his growing interest in psychiatry, and 20 years after graduating with his MD degree, returned to training, doing a 3 year residency in psychiatry at the University of Maryland followed by a fellowship in Clinical Neuroendocrinology at the National Institute of Mental Health. He continued his research at NIMH for the next 4 years, before joining the faculty at the University of Illinois at Chicago, and becoming an attending psychiatrist at the VA Medical Center in Chicago, positions he held until his retirement. At the VA, Harvey kindled a passion and reputation for being a fierce advocate for his patients and their struggles to receive the mental health care and benefits they deserved.

Harvey’s nearly 40 published articles and papers over the course of his career included groundbreaking research that contributed to the development of the Ames Carcinogenicity Test, a widely used method for determining the carcinogenic potential of a compound.

In 1991, one of Harvey’s colleagues described him this way:
Harvey is one of our very best investigators, and it will be a great loss to our group to have him go to Chicago. He is also one of the finest people I have ever had the opportunity of working with. His intellectual sparkle, personal charm and kindness, and genuine dedication to learning and teaching make him unique. Despite his impeccable scientific credentials and true passion for scientific investigation, he is also a dedicated and exceptionally skilled clinician and mentor.

Harvey married Dr. Carolyn Dickson in 1965, and worked with her both at the University of Michigan, and in Bethesda, Maryland. They had one son, Harvey Amani Whitfield in 1974 who himself has gone on to a distinguished career as a professor of African American and Afro Canadian History. Harvey and Carolyn were divorced in 1989.

Skipper considered himself extremely fortunate to have met Barbara Sittler in Chicago, whom he married in 2000. Barbara and Skipper found in each other that rare combination of mutual respect, love, contentment and joy and enjoyed 21 years of happy married life, filled with humor, companionship and caring. Barbara and Skipper were devoted to their extended family and had many travel adventures, especially to Scotland, a country both he and Barbara had a special love for. They made regular trips to Vermont to visit his son’s family including their much loved granddaughter Hope. He was able in later years to indulge his interests and love of Lionel model trains, photography, sailing, jazz, good food and friendships.

One often hears of brilliant scientists who were only able to achieve their academic success at the cost of a fulfilling personal life. But Skipper shattered that stereotype completely. With Barbara he happily settled into the role of family cheerleader, host, font of advice and wisdom, and not infrequently, emotional refuge for their large extended family. Without fail, Skipper would throw open the door for any family dropping by (often unannounced) and invite them in for dinner and a scotch or three, a roaring fire, an excellent jazz album playing in the background, with the makings for S’mores always on hand for younger guests. No matter your current interest or desired conversational topic he engaged with equal vigor on topics ranging from photography to history to current affairs to music and the fine points of the best pasta carbonara. He was vibrant, jolly and interested. Friends and family unfailingly describe Skipper’s sweet, kind, unassuming nature and his great smile, which was broad and frequent.

Harvey is survived by his beloved wife Barbara, his son Amani, daughter-in-law Natalie, granddaughter Hope, sister Andrietta, niece Alexis, and cousin Homer Fleetwood along with the entire Matthews family: Aunt Shirley and cousins Jada, Paula and Jeanie Matthews. He was a much loved uncle on the Sittler side to Amy, Stephen, Edward, Will, Paul, Noah, Abby and Lilia, and sisters-in-law Claudia, Cynthia, and Bay, and brother-in-law Ted.

During the last years of his life, Skipper was lovingly tended by Barbara at their home, assisted by able and devoted caregivers, Leisha, Lisa and his North Shore Hospice Team. A memorial service at First United Methodist Church of Evanston is being planned.

He was a man, take him for all in all, I shall not look upon his like again.