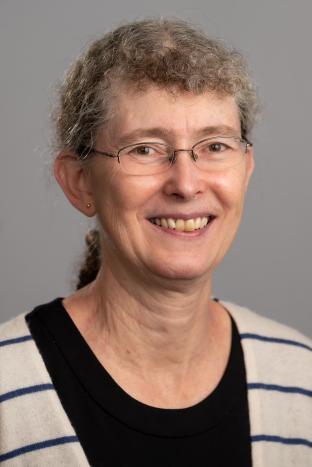 Dr. Hanson earned a B.A. in Molecular Biophysics and Biochemistry from Yale University, and Ph.D. and M.D. degrees from the Stanford University School of Medicine studying Ca2+/calmodulin dependent protein kinase II. She then completed postdoctoral work at Yale in membrane trafficking before joining the Department of Cell Biology and Physiology at Washington University, where she rose from assistant professor in 1997 to Gerty T. Cori Professor in 2016. She moved to the University of Michigan as the Minor J. Coon Professor and Chair in 2018.

Dr. Hanson is an associate editor of the Journal of Biological Chemistry and a member of the American Society of Cell Biology, the American Society for Biochemistry and Molecular Biology, and the American Association for the Advancement of Science. She recently served as chair of the National Institutes of Health (NIH) Membrane Biology and Protein Processing Study Section, and earlier as chair of the NIH Synapses, Cytoskeleton and Trafficking Study Section. Among her honors, she was a W.M. Keck Foundation Distinguished Young Scholar in Medical Research and also received Searle, McKnight, and Sloan scholar awards. She will serve as vice chair and then chair of the Gordon Research Conference on Lysosomes and Endocytosis.

Dr. Hanson’s research focuses on understanding how proteins interact to regulate the structure and organization of cell membranes both inside and outside the cell, and has implications for understanding a wide range of diseases including among others neurodegenerative disorders such as Alzheimer’s disease and the debilitating movement disorder, dystonia. Specific areas of interest include protein-protein and protein-membrane interactions involved in membrane trafficking and organelle structure, with focus on ESCRTs, AAA+ ATPases and associated machinery.