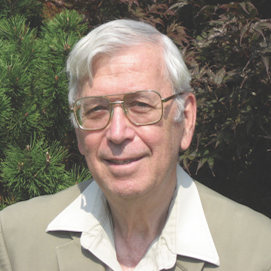 Dr. William E.M. Lands was born in Chillicothe, Missouri on July 22, 1930. He received a B.S. in Chemistry from the University of Michigan in 1951 and a Ph.D. in Biological Chemistry from the University of Illinois, Urbana, in 1954 working under the direction of Herbert Carter. After a year as a National Science Foundation postdoctoral research fellow at the California Institute of Technology, he joined the faculty of the Department of Biological Chemistry at the University of Michigan where he rapidly rose to the rank of Professor. In 1980, Dr. Lands became Professor and Chair of the Depart­ment of Biochemistry at the University of Illinois College of Medicine in Chicago. After retiring from university teaching in 1991, he moved to the National Institute on Alcohol Abuse and Alcoholism where he directed the basic research program until 1997. From 1997 until his retirement in 2002, he served as Senior Scientific Advisor to the Director of NIAAA.

Dr. Lands continues to work as a consultant and is a sought after speaker because of his knowl­edge of the metabolism of omega-3 and omega-6 essential fatty acids. Dr. Lands’ major research in­terests have always been in the metabolism of fats, phospholipids, and prostaglandins. In addition to his work on dietary omega-3 and omega-6 essential fat­ty acids, he is well-known for delineating the Lands Pathway for remodeling of membrane phospholipids and for his studies on the biochemical mechanism of prostaglandin synthesis and its inhibition by non­steroidal anti-inflammatory drugs.

He has authored over 250 papers and the book, Fish, Omega-3 and Human Health. One of the world’s 1000 most cited scientists in 1965-1978, he has received numer­ous awards including the Glycerine Research Award (1969), the Verhagen Lectureship at Rotterdam University (1979), honorary membership in the Aus­tralian Rheumatism Association, the Pfizer Biomedi­cal Research Award (1985), the AOCS-Supelco Lipid Research Award (1997) and selection as a Fellow of the American Society Harvard Nutritional Sciences (2003). Over the course of his career Dr. Lands graduated 13 Ph.D. students and mentored about 50 postdoctoral fellows who all benefited greatly from his demanding Missouri “show me” approach to training.