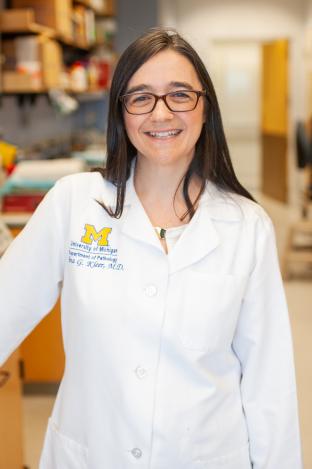 Dr. Kleer received her medical degree from the University of Buenos Aires School of Medicine in Buenos Aires, Argentina in 1993. She began her residency in Anatomic and Clinical Pathology at the Mayo Clinic in Rochester, Minnesota, and completed her training at the University of Michigan in 1999. During her last year of training, she served as a Surgical Pathology Fellow with special interest in breast pathology under the mentorship of Dr. Harold Oberman. In 1999 she joined the faculty as an Assistant Professor, was promoted to Associate Professor with tenure in 2005, and to full Professor with tenure in 2011. In 2007, Dr. Kleer was honored as the first Harold A. Oberman Collegiate Professor in Pathology, a position she currently holds. In addition, she is the Director of the Breast Pathology Program at the University of Michigan. She has been an active member of the Breast Care Center since 1999. Dr. Kleer is the principal investigator of an NIH and DOD-funded research laboratory at the Rogel Cancer Center working to understand mechanisms of breast cancer invasion and metastasis, and to develop useful breast tissue-based biomarkers. Her work bridges basic science and clinical applications. Dr. Kleer has been participating in NIH and DOD study sections, and was a permanent member of the NIH Study Section Tumor Progression and Metastasis from 2008-2012. In addition to her research and clinical work, Dr. Kleer is a dedicated mentor to medical students, graduate students, and physicians both in the laboratory and in surgical pathology. Many of Dr. Kleer’s trainees have gone on to highly successful academic careers in the US and abroad. In 2013, she was the distinguished recipient of the Ramzi Cotran Young Investigator Award from the United States and Canadian Academy of Pathology (USCAP). In 2014, she was inducted into the American Society for Clinical Investigation (ASCI). Most recently, she was the recipient of the 2019 AACR Outstanding Investigator Award for Breast Cancer Research.

Employing pathology, cell and molecular biology, and genetics our laboratory discovered several major events associated with metastasizing breast cancers, which are the basis of our lab investigations. Current lab projects include:
i) Elucidation of mechanisms of EZH2 function in breast cancer. Studies of EZH2 in our lab span over a decade. We established the connection between EZH2, a Polycomb group protein and epigenetic regulator, and breast cancer metastasis, and elucidated that in aggressive breast cancers, EZH2 is phosphorylated at T367 by p38MAPK which induces its cytoplasmic localization and allows binding to cytoskeletal proteins that induce migration and invasion. We are currently investigating the epigenetic role of pEZH2 T367 using specific deletion mutants, patient derived cells, as well as animal models.
ii) Investigation of the tumor suppressor function of CCN6, a matrix-associated protein, in TNBC. Through development of a mammary specific CCN6 knockout mouse model we found that CCN6 has tumor suppressor functions in TNBC, and in particular a highly aggressive form termed metaplastic carcinomas. Currently, we are working to elucidate the detailed mechanisms, which involve modulation of WNT signaling.
iii) Elucidation of the role mesenchymal stem/stromal cells in breast cancer metastasis. We are investigating the consequences of MSC engulfment by breast cancer cells and the neoplastic functions of the resultant hybrid cells in breast cancer metastasis. In this work, we are employing state-of-the-art microfluidics in collaboration with Dr. Yoon, and high throughput sequencing and bioinformatics analyses.