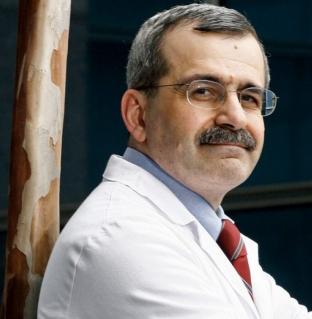 From my early clinical training in medical school, I saw how people suffered from cancer, and I always wished I could help them. There is a global effort toward a cure, but the need remains great, even today." Dr. Imad Shureiqi has dedicated his life's research work to contribute to ending this never-ending disease, and has focused much of his research on colon cancer, which remains prevalent in industrialized countries like the U.S. A hands-on physician-scientist, Dr. Shureiqi earned his MD in Medicine at Damascus University. He completed his Residency in Internal Medicine at State University of New York at Buffalo. He completed a Fellowship in Medical Oncology at the University of Michigan, where he began his research work on gastrointestinal and colon cancers. Here he also earned his M.S. in Clinical Trial Design and Statistical Analysis. He was recruited to M.D. Anderson in 1999, where he has served as an Assistant Professor and later as an Associate Professor, Departments of Clinical Cancer Prevention, Division of Cancer Prevention and Population Sciences and Gastrointestinal Medical Oncology, Division of Cancer Medicine. Dr. Shureiqi has been widely recognized and honored for his peer-reviewed research, academic leadership, and publications. He has served as the principal investigator for a series of NIH-funded studies during the last 20 years to define the role of lipid signaling in gastrointestinal carcinogenesis, especially 15-Lipoxygenase-1 (15-LOX-1) and PPAR-delta (PPARD). 15-LOX-1 is a critical enzyme for the production of various inflammation/terminal differentiation-regulatory lipid signaling mediators, including 13-S-hydroxyoctadecadienoic acid from linoleic acid, lipoxins from arachidonic acid, and resolvins from eicosapentaenoic and docosahexaenoic acids. Given the important regulatory function of 15-LOX-1 in terminal cell differentiation and inflammation, its expression is inducible and highly regulated in normal human cells. 15-LOX-1 is, however, down-regulated in various human cancers, esophageal, breast, and pancreatic. 15-LOX-1 re-expression via pharmaceutical agents or adenoviral vectors induces growth inhibition and reestablishes terminal differentiation and apoptosis in cancer cells. Dr. Shureiqi's research group was the first to identify PPARD, a lipid nuclear receptor transcriptional factor, as a downstream target of 15-lipoxygenase-1 in colonic tumorigenesis. In later studies, his group developed the first mouse model of targeted PPARD genetic disruption in intestinal epithelial cells to demonstrate PPARD modulation's effects in these cells on colonic tumorigenesis. Their more recent studies reported on the first intestinally targeted PPARD overexpression model, which showed the profound impact of PPARD on azoxymethane-induced colonic carcinogenesis and gastric carcinogenesis. Dr. Shureiqi has returned to the University of Michigan in 2020 to continue his research work as a physician-scientist.

Lipids play vital roles in cell biology in health and diseases. Unfortunately, these roles remain understudied and poorly defined. Our laboratory's primary research interests are improving the understanding of how lipid signaling modulates carcinogenesis and identifying molecular targets for treatment and prevention of cancer.

Our laboratory group's research efforts have made significant contributions to improving the understanding of 15-Lipoxygenase-1 (15-LOX-1) and PPAR-delta (PPARD) roles in gastrointestinal carcinogenesis. 15-LOX-1 is the primary enzyme for linoleic acid's oxidative metabolism; linoleic acid the most commonly consumed polyunsaturated fatty acid in humans. PPAR-delta (PPARD) is a transcriptional receptor activated by ligands, especially lipids, to regulate major cellular events in health and disesaes (e.g., cancers).