All Heart: A Tiny Patient and Her Family Prepare to Heal 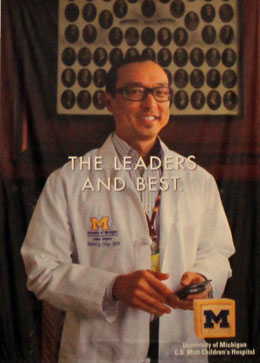 Sofia Lapres, was born with a congenital heart defect. She received her new heart on April 24. The title of Kristyn LaPres' popular online diary says it all: Sofi needs a heart.

Sofia is the cherub-faced, 21-month-old daughter of Kristyn and Mike LaPres, who has spent months at C.S. Mott Children's Hospital waiting and rallying for a new heart. Sofi was born with hypoplastic left heart syndrome, a congenital heart defect in which the left side of the heart is severely underdeveloped. Before she was 2 years old, Sofi had endured two open-heart surgeries and two angioplasties.

"I have found, from telling our story, that people are generally surprised about the reality of this process in contrast to how it is portrayed in TV and film," Kristyn says.

But like the best-loved films, there's a happy ending. After three months on the transplant list, Sofi underwent open-heart surgery on April 24 - the surgery family and friends in their hometown of Muskegon had been hoping for - a transplant.

"That day, everyone got to spend some time with Sofi because her surgery was delayed," Kristyn writes. "The generous parents of the donor had also donated the child's liver, and the heart was the very last thing to come out. We didn't mind the delay. We were really enjoying the great mood Sofi was in. She was basking in the attention."

Nurses and staff on Mott's 5East unit had come to know Sofi well. The hospital room where the little girl blew kisses was a popular stop, even by players of the Detroit Lions and Detroit Tigers who came to cheer up pint-sized patients. Nothing, though, comes close to the familiarity of home or can erase the desperation of watching a child's health deteriorate. In February, an infection forced doctors to temporarily take Sofi off the transplant list.

Kristyn told herself that Sofi would either get her heart or get her angel wings. After the overnight surgery performed by a team led by cardiac surgeon Richard Ohye, M.D., it was a new heart. While Sofi is not completely out of the woods, the family now sees a healing path.

"I took some pictures of her hands, ears, lips-everything, to show how pink she is! She is not the least bit blue!" the young mother says, describing Sofi's formerly blue tint that indicated a lack of oxygenated blood. "It is so amazing to see, I just can't get over it. I keep looking at her hands and feet and just smile." - SK