A Reason to Celebrate

From: The Register-Guard, Eugene OR
Byline: Mark Baker 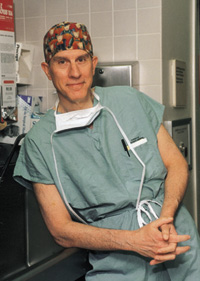 Sophia Costa's Mother's Day present came early this year. Almost six months early to be precise. It came before her only child, Isabelle, turned a year old on Jan. 11.

It came that late-November day at the University of Michigan when the doctors told her Isabelle had not only survived her second open-heart surgery, this one to reconstruct her tiny heart, but that she had a good chance to heal and grow into a relatively normal little girl.

"This is the gift," Sophia Costa says, sitting on a blanket in the family's new back yard in north Eugene's Santa Clara neighborhood, holding Isabelle as she bobs on her feet.

But don't think Mother's Day - this is the 100th anniversary of the observance - will pass today without celebration at the Costa household. Especially when Sophia has five mothers and, thus, Isabelle has five doting grandmothers.

Born with heart ailments herself in New Mexico on May 8, 1973, Sophia got to go home from the hospital with her mother, Elisabeth Lyman of Eugene, on Mother's Day that year. Not long after moving to Eugene in 1976, mother and daughter became part of a larger, extended communal family. ( Lyman, along with friends Lois Wadsworth, Sonja Snyder and Lucia McKelvey, three of Sophia Costa's "moms," began what is today the Eugene Weekly newspaper.)

The whole family will celebrate at the new home that Sophia and Dan Costa are renting in Santa Clara.

Isabelle Costa was born on Jan. 11, 2007, at Oregon Health & Science University in Portland with a rare combination of birth defects that included a mightily damaged heart muscle. She underwent open-heart surgery at OHSU at just 6 days old.

Doctors at the University of Michigan, where she underwent the risky reconstruction surgery on Nov. 28, said Isabelle was a "one in a million" case. She was not only born with situs inversus (reversal of internal organs) that included her heart being on the right side instead of the left, but with only two chambers in her heart instead of four, a big hole in the middle of it, transposed arteries and pulmonary stenosis. Not to mention a badly damaged right lung.

Dr. Ed Bove, one of the nation's leading pediatric heart surgeons, told the Costa family there was a good chance Isabelle might not survive the surgery, but that it was her only chance. But she did survive. And today, her outlook is as promising as could be, given the circumstances. That's what OHSU cardiologist Mary Rice recently told Sophia Costa during Isabelle's regular three-month checkup.

"Her heart is great," Sophia Costa says. "She is doing 'fantabulous.'"

Isabelle still has two leaks in her heart, but they are stable.

She suffered a nasty bout of stomach flu in March and had to be hospitalized for a week, and also came down with pneumonia not long after that, but things have smoothed since.

And Sophia Costa is one grateful mother, even with the uncertainty of what insurance will ultimately cover of Isabelle's more than $1 million in medical bills. (Community fundraisers last fall raised more than $20,000, enabling the Costas to travel to Michigan for six weeks and for Dan to take leave of his job at Lane Forest Products.)

Isabelle now has four teeth. She says "mama" and "dada" and "num-nums" and is on the verge of standing up all by herself.

After her birth, the Costas had to wait until Isabelle was physically big enough (at least 10 months old) to handle the surgery in Michigan. Last Mother's Day, her future was most uncertain.

"And that was always tough," Sophia Costa says. "That was always a daily, you know ... in the back of our minds. This year, it's all about how lucky we are; how wonderful she is; and that we know we have a future with her."