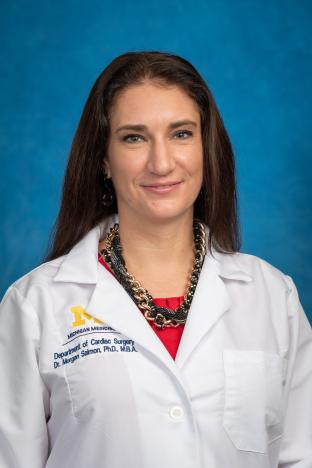 Dr. Salmon was raised in Richmond, Virginia. She received a B.A. in Economics from the University of North Carolina at Chapel Hill in 2002. She then completed a Ph.D. in Biochemistry from Virginia Commonwealth University Medical Center in 2008 investigating the roles of zinc-finger transcription factors in skeletal muscle development as an American Heart Association pre-doctoral fellow under Dr. Zendra E. Zehner in the Department of Biochemistry. She was also elected to the Phi Kappa Phi Honor Society. She continued her training as a T32 trainee and American Heart Association funded post-doctoral fellow at the University of Virginia in the Cardiovascular Research Center under Dr. Gary K. Owens. While working in the Cardiovascular Research Center at the University of Virginia, she investigated Krüppel-like and zinc-finger transcriptional regulation of smooth muscle marker genes in cardiovascular diseases. She joined the Department of Surgery at the University of Virginia in 2012 and began studying Krüppel-like and zinc-finger transcriptional regulation of aortic aneurysms in collaboration with Drs. Gilbert R. Upchurch and Gorav Ailawadi. She received an American Heart Association Scientist Development Grant in 2014 to study Krüppel-like and zinc-finger transcriptional regulation in aortic aneurysms. She has also received travel awards to the Atherosclerosis, Thrombosis and Vascular Biology Meeting in 2014 and a 2016 Travel Award to the FASEB Krüppel-like Factor Meeting in 2016. In 2017, She was a finalist for the Vivian A. Thomas Young Investigator Award at the American Heart Association National Meeting in 2017. She joined the faculty at the University of Virginia as an Assistant Professor in the Department of Surgery in 2015. In 2016, Dr. Salmon completed a MBA with concentrations in Innovation and Marketing with a Leadership Designation from the online MBA program at Kenan-Flagler Business School at the University of North Carolina at Chapel Hill, which in 2021 tied with Carnegie Mellon as the #1 online MBA program in the United States.

At Virginia, Drs. Salmon and Ailawadi had a long-standing collaboration and co-ran the Aortic Aneurysm Laboratory in the Department of Surgery at the University of Virginia. Dr. Salmon has been funded by the National Institutes of Health and the American Heart Association. She has published over 30 basic science peer-reviewed manuscripts in journals such as Circulation, Circulation Research, ATVB, and Nature Medicine. Dr. Salmon is a member of the North American Vascular Biology Association and helps edit the organization’s monthly publications alert, the American Heart Association, the American Chemical Society, and the American Society for Matrix Biology. In her leisure time, Dr. Salmon fosters rescue dogs and is an Executive Board Member for K Kids Dachshund Rescue, a dachshund and dachshund mix rescue located in Charlottesville, Virginia.

Aortic Aneurysms are a dilation of the aorta to greater than 50% of its original diameter and can be classified according to their anatomical locations in reference to the diaphragm. Thoracic aortic aneurysms (TAAs) are located above the diaphragm while Abdominal Aortic Aneurysms (AAAs) are located below the diaphragm. TAAs tend to have genetic causes and often dissect while AAAs are often non-genetic and can result in rupture. Aortic Aneurysms remain the 15th leading cause of death in the United States and aortic rupture remains a high cause for morbidity and mortality, as ruptured AAAs have a 48% mortality rate. Even more concerning, ruptured TAAs have a mortality rate over 90% and emergency corrective surgery is difficult and often stull results in death. Often, aneurysms remain clinically undiagnosed and are thought to be under-represented in the current population as many deaths perceived to be from cardiac arrest are actually from aneurysm rupture. In terms of possible treatment therapies, corrective aneurysm repair through either open or endovascular surgery remains the only treatment therapy for this deadly disease. Therefore, there is a great need for possible medical treatment therapies to halt aneurysm growth or to prevent aortic rupture in human disease.

Recent evidence suggests that thoracic and aortic diseases have different disease pathologies that could be based on the embryological origin of the aortic layer and thereby could have different medical treatment therapies. Sadly, the mechanisms of aortic aneurysm formation and advanced aneurysm disease leading to rupture remain largely unknown. It is unknown why some patients have small aneurysms that rupture while other patients rupture at considerably larger aortic diameters. Dr. Salmon and her team seek to understand mechanisms that regulate aortic aneurysm formation, progression and rupture in abdominal and thoracic aortic aneurysms. Dr. Salmon’s team has been on the forefront of helping develop novel models of chronic, thrombotic aneurysm formation that mimics human disease progression and to use these models to investigate novel pathways that might develop treatment therapies to halt disease progression or prevent rupture.

MBA with concentrations in Innovation and Marketing, EMBA Program, Kenan-Flagler Business School at the University of North Carolina at Chapel Hill, 2016

Department of Surgery, University of Virginia 2012-2013