Many cases of ruptured aneurysm can be prevented with early diagnosis and medical treatment. Because aneurysms can develop and become large before causing any symptoms, it is important to look for them in people who are at the highest risk.

When found in time, aneurysms can usually be treated successfully with medicines or surgery. If an aortic aneurysm is found, the doctor may prescribe medicine to reduce the heart rate and blood pressure. This can reduce the risk of rupture.

Large aortic aneurysms, if found in time, can often be repaired with surgery to replace the diseased portion of the aorta. The outlook is usually excellent.

Most aortic aneurysms do not produce symptoms, even when they are large. Only half of all people with aortic aneurysms notice any symptoms. Aortic aneurysms are identified more often now than in the past because of chest Computed Tomography (CT) scans performed for other medical problems.

In a common type of thoracic aortic aneurysm, the walls of the aorta become weak and a section nearest to the heart enlarges. Then the valve between the heart and the aorta cannot close properly and blood leaks backward into the heart. Less commonly, a TAA can develop in the upper back away from the heart. A TAA in this location can result from an injury to the chest, such as from an auto crash. 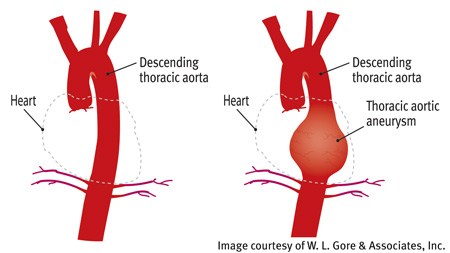 What Causes an Aneurysm?

An aneurysm can result from atherosclerosis (hardening and narrowing of the inside of arteries). As atherosclerosis develops, the artery walls become thick and damaged, and lose their normal inner lining. This damaged area of artery can stretch or "balloon" from the pressure of blood flow inside the artery, resulting in an aneurysm.

An aneurysm also can develop from constant high blood pressure inside an artery.

A thoracic aortic aneurysm can result from an injury to the chest (for example, an injury that occurs from an auto crash). Certain medical conditions, such as Marfan syndrome, that weaken the body's connective tissues, also can cause aneurysms.

In rare cases, infections such as untreated syphilis (a sexually transmitted infection) can cause aortic aneurysms. Aortic aneurysms also can occur as a result of diseases that cause inflammation of blood vessels, such as vasculitis.

Who Is at Risk for an Aneurysm?

Factors that increase your risk for aneurysm include:

What Are the Signs and Symptoms of a Thoracic Aneurysm?

The signs and symptoms of an aneurysm depend on its type, location and whether it has ruptured or is interfering with other structures in the body. Aneurysms can develop and grow for years without causing any signs or symptoms. It is often not until an aneurysm ruptures or grows large enough to press on nearby parts of the body or block blood flow that it produces any signs or symptoms.

grow. Signs or symptoms may include:

How Is an Aneurysm Diagnosed?

To diagnose and evaluate an aneurysm, one or more of the following tests or procedures may be performed:

How Is an Aneurysm Treated?

Medicine and surgery are the two types of treatment for an aneurysm. Medicines may be prescribed before surgery or instead of surgery. Medicines are used to reduce pressure, relax blood vessels and reduce the risk of rupture. Beta blockers and calcium channel blockers are the medicines most commonly used.

Surgery may be recommended if an aneurysm is large and likely to rupture.

Treatment recommendations for aortic aneurysms are based on the size of the aneurysm. Small aneurysms found early can be treated with "watchful waiting."

Please feel free to download and view our booklet on heart surgery information for patients and their families (1.7MB, PDF).