Microtubules are dynamic biopolymers composed of stacks of structurally homologous alpha- and beta-tubulin dimers, cylindrically arranged in about 10 to 16 protofilaments. They play a crucial role in the cytoskeleton of the cell, providing structural support as well as facilitating cellular transport via molecular motors, beating of cilia and flagella, and separation of chromosomes during the cell cycle. Microtubule polymerization is central to their biological functions, with varying growth rates in vitro and in vivo. Recent studies have shown that microtubules derived from C. elegans polymerize at a rate three times faster than those from vertebrates. The mechanism for achieving faster growth rates is not clear, especially given that the alpha- and beta-tubulins share ~88% and ~89% sequence identity with bovine (as candidate vertebrate) tubulins, respectively. To this effect, we are investigating the dynamical properties of nematode and vertebrate tubulins using molecular dynamics (MD) simulations of isolated dimers as well as dimers in neighboring protofilaments. Initial results from simulations of isolated dimers indicate that nematode tubulins are conformationally similar to those in a microtubule lattice, potentially explaining a role in faster polymerization rates. Ongoing efforts include MD simulations of dimers in neighboring protofilaments, with starting structures from a hitherto unpublished 12 protofilament cryo-EM map of nematode microtubule. We hypothesize that stronger longitudinal and lateral contacts and smaller intra-dimer bend angles of nematode tubulins may contribute to the faster observed rates of polymerization of C. elegans microtubules. 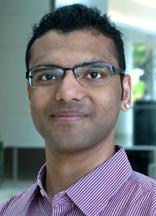