RNA-directed DNA methylation (RdDM) is a process known to influence gene expression and transposon silencing in plants by establishing repressive chromatin modifications. The central element of this process is long non-coding RNAs (lncRNAs), which are produced by a specialized RNA polymerase known as Pol V. These lncRNAs recruit a de novo methyltransferase, DRM2, which brings about DNA methylation to enable silencing of their target loci.

Since Pol V is the most important factor controlling each of these phenomena, it is important to understand how Pol V activity is regulated. The hypothesis that DNA methylation affects Pol V recruitment to the RdDM loci was tested. RNA-immunoprecipitation was performed with Pol V antibody in DRM2 mutants. Preliminary analysis shows a reduced recruitment of Pol V to the loci in absence of DRM2, suggesting that DRM2 and Pol V are part of a positive feedback loop. 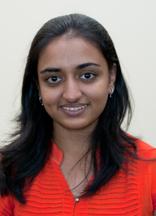