Genome-wide association studies (GWAS) successfully identified more than a hundred genomic regions that contribute to schizophrenia risk. However, extracting biological mechanisms from GWAS is a challenge because the majority of common risk variants reside in noncoding regions of the genome. In this talk, I will outline how high-resolution 3D maps of chromatin contacts in the human brain permit large-scale annotation of non-coding variants. In particular, I will introduce a novel platform that my lab has developed, Hi-C-coupled MAGMA (H-MAGMA), that annotates GWAS by incorporating chromatin interaction profiles from human brain tissue. While H-MAGMA identified neurobiologically relevant target genes for psychiatric disorders, application of H-MAGMA to schizophrenia GWAS identified thousands of genes to be associated with schizophrenia, necessitating the need for refining variants. To this end, we performed a massively parallel reporter assay (MPRA) on schizophrenia risk variants, from which we detected 440 variants with allelic regulatory activity. Characterization of these functional regulatory variants provided previously unknown regulatory principles of schizophrenia.

Hyejung Won is an Assistant Professor in the Department of Genetics and Neuroscience Center at the University of North Carolina at Chapel Hill. She received her B.S. and Ph.D. in Biology from Korea Advanced Institute of Science and Technology (KAIST), where she conducted research revealing the underlying mechanism of neurodevelopmental conditions using genetically modified mice under the supervision of Dr. Eunjoon Kim. She then joined Dr. Dan Geschwind’s group at UCLA, where she established Hi-C, a genome-wide chromosome conformation capture technology, and generated chromatin interaction profiles from the developing and adult human brain. Her lab leverages the genomics approach to bridge the gap between genetic risk factors and neurobiological mechanisms by mapping genetic variants of unknown function to the genes that they regulate and identifying how dysfunctional gene regulation contributes to disease pathogenesis. Hyejung is the recipient of the NIH Director’s New Innovator Award, HHMI Gilliam Fellowship, NIH Pathway to Independence Award, and a NARSAD Young Investigator Award. She is also an active participant of the Impact of Genomic Variation on Function (IGVF) and PsychENCODE consortia. 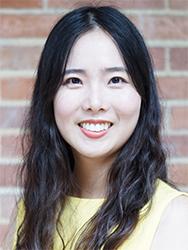 We try to bridge the gap between genetic risk factors for psychiatric illnesses and neurobiological mechanisms by decoding the regulatory relationships of the non-coding genome. In particular, we implement Hi-C, a genome-wide chromosome conformation capture technique, to identify the folding principle of the genome in human brain. We then leverage this information to identify the functional impacts of the common variants associated with neuropsychiatric disorders.