Treatment with the Fraxel® re:store laser is a truly revolutionary approach to improving the appearance of the skin. The laser targets sun damaged or scarred skin using numerous tiny focused columns of laser light. The microscopic beams of light penetrate into the deeper layers of the skin breaking down old, damaged skin and stimulating the body's own natural healing processes to produce new, healthier skin. Although it cannot be seen with the naked eye, by design, the laser actually targets only a fraction of the skin's surface area during each treatment session, leaving the remaining microscopically untreated skin to help rapidly heal the treated areas. Research performed by the Cosmetic Dermatology & Laser Center (CDLC) physicians has demonstrated the molecular changes that underlie the positive clinical results with this laser treatment. New collagen formation is stimulated by this treatment and over time the skin may gradually "rebuild" from the inside to restore a more youthful appearance and feel, as the new collagen softens the appearance of aging skin and scars.

This device is considered “non-ablative” (or “non-wounding”), meaning that it spares the surface of the skin even as it works to make changes to the deeper layers of the skin. Down time is usually minimal after the treatments with redness and sometimes mild swelling generally resolving within a few days.

The Fraxel® re:store laser is safe for all skin types and may be used to improve the appearance of skin at nearly any body site including the face, neck, chest, and hands. Maximum results are generally achieved through a series of three to six treatment sessions. The skin's appearance may be quickly enhanced and continue to improve for months after the treatments. Wrinkles, acne scarring, sun damage, and melasma (the "mask of pregnancy") may all be improved with this laser therapy. The result is smoother, fresher, more uniform, and healthier looking skin. 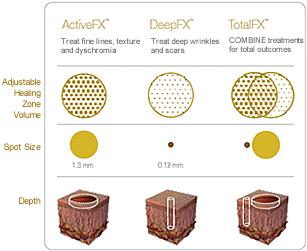 We are pleased to offer our patients treatment with a type laser that will change the way sun damaged, scarred, and wrinkled skin is treated for years to come. Combining the safety of fractionated laser therapy with the unparalleled efficacy of carbon dioxide laser treatments, the UltraPulse® Encore fractionated CO2 laser (Total FX™) is truly revolutionary technology. With this device, microscopically small but deeply penetrating and highly effective CO2 laser "microbeams" remove old sun damaged and scarred tissue and stimulate the body to produce substantial amounts of new, healthier collagen in the skin. This part of the treatment is called “Deep FX™”. In addition, most patients also elect to have the surface of their skin treated with a second, more superficial laser pass (Active FX™) designed to blend color imperfections and further refine the skin’s texture. Depending on the specific patient’s goals, the Deep FX™ and Active FX™ laser passes may be performed alone or in combination during one treatment session. When performed together, the treatment is known as Total FX™. CDLC physicians have been actively researching the molecular mechanisms whereby this device produces such positive changes in the skin’s appearance so that we may optimize treatment settings for our patients.

The result of fractionated CO2 laser resurfacing is generally a significantly improved appearance of the treated skin with wrinkles and scars substantially diminished and skin color made more uniform. Patients especially appreciate the laser’s ability to safely treat not only facial skin, but also other areas of the body. The results are very natural and patients are pleased to see that they simply look like a refreshed and more youthful version of themselves.

Because this device produces tiny openings in the skin’s surface, there is a period of a few days after the treatment when patients experience significant swelling, redness, and some oozing of serum from the treated skin’s surface. However healing after this treatment is relatively rapid with minimal care required for about a week and redness of the treated skin generally resolving over the subsequent week. Most patients' appearance will not only be substantially improved after only about ten days, but it will also continue to improve for months after this unique laser therapy as the treated skin creates more collagen.

Because of extensive research done here at the University of Michigan regarding the molecular effects of carbon dioxide (CO2) laser therapy, we are uniquely positioned to maximize the benefits of this treatment for our patients.

Ready to make a change? Call 734-936-4054 to schedule a consultation with one of our board-certified dermatologists