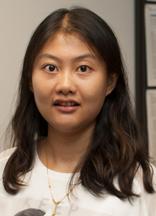 Since joining the research group led by Drs. Michael Boehnke and Laura Scott, I have been working on three research projects with an emphasis in exploring the effects of genetic variants on different traits. The first project focused on identifying sex-interacting eQTLs in human skeletal muscle. I used two approaches to survey for variants (1<Mb away from the transcription start site) that displayed sex-interacting effects. No SNP showed differential SNP effects by sex (sing FDR <0.05 threshold) was identified. The results suggested that it was unlikely that there were very strong differences by sex in the effect of genotypes on gene expression in skeletal muscle. In order to detect less strong sex-interacting effects, larger sample size might be needed. The second project was to evaluate the effect of a low frequency inactivating AKT2 variant (rs184042322) on glucose uptake in several human tissues. This analysis was conducted with our collaborators in Finland. I helped checking the correlation between different traits of interest, built a linear model to detect the influence of rs184042322 on tissue specific glucose uptake, surveyed age-interacting effects of AKT2 variant and compared with the impact of rs184042322 was found to be normally associated with glucose uptake in several tissues (p<0.05) and reached statistical significance after Bonferroni correction in its association with whole body glucose uptake. No statistically significant age-interacting effect was detected after multiple comparison adjustment. As a continuation of our previous work on understanding the regulatory signature of local eQTLs in human skeletal muscle, the third project is to detect trans-eQTL (variants that are >Mb away from the transcription start site) using the RNA sequencing data from 267 genotyped individuals. This project is currently ongoing. With respect to some issues that arose in the preliminary analysis and some could forsee, I came up with a proposal and presented in the group meeting. After prelim, I will focus on carrying out the agreed analysis.