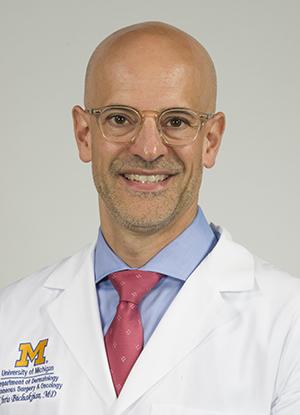 Dr. Christopher Bichakjian is professor of dermatology and chair of the Department of Dermatology at the University of Michigan Medical School.

Dr. Bichakjian is a foremost expert in the field of cutaneous surgery and oncology. He has a special interest in Merkel cell carcinoma and established one of the first multidisciplinary programs in the world for this rare skin cancer in 2006. He has presented over 100 national and international invited lectures and visiting professorships, and authored or co-authored nearly 90 peer-reviewed publications with a primary focus on cutaneous oncology.

Dr. Bichakjian received his medical degree from Radboud University in The Netherlands. After relocating to the US, he completed residency in dermatology and fellowship in micrographic surgery and cutaneous oncology at Michigan Medicine. He subsequently practiced Mohs surgery in private practice and served as adjunct faculty at Weill Medical College at Cornell University in New York City.

In 2004, Dr. Bichakjian was recruited back to Ann Arbor to join the faculty in the Department of Dermatology at Michigan Medicine. He served as director of the UM Multidisciplinary Merkel Cell Carcinoma Program for more than a decade (2006-2017), In addition, he served as chief of the Division of Cutaneous Surgery and Oncology and as director of the Multidisciplinary Melanoma Program in the Rogel Cancer Center from 2017-2020.

On a national level, Dr. Bichakjian has been heavily involved with the American Joint Committee on Cancer (AJCC), the National Comprehensive Cancer Network (NCCN), and the American Academy of Dermatology (AAD) to improve and develop optimal staging and clinical practice guidelines in cutaneous oncology, for which he was awarded the AAD Presidential Citation Award in 2018. Dr. Bichakjian is President-elect of the Michigan Dermatological Society and currently serves a nine-year term on the Board of Directors of the American Board of Dermatology.