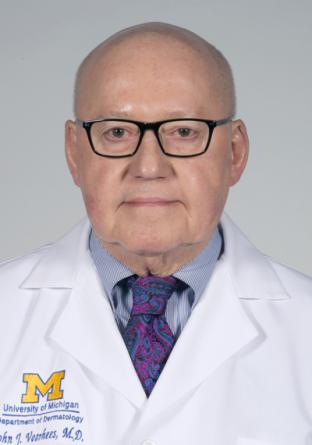 Dr. Voorhees has received many awards and honors including election to Alpha Omega Alpha, the Henry Russell Research Award of the University of Michigan in 1973, and the Distinguished Achievement Award of the University of Michigan Medical Center Alumni Society in 2004. He is the only individual to receive the Taub International Memorial Award for Research in Psoriasis twice (1973 and 1986). He was elected to the American Society for Clinical Investigation in 1974, the Association of American Physicians in 1993, fellowship in the Royal College of Physicians of London in 2000, fellowship in the Royal Society of Medicine in 2002, Honorary Member of the European Dermatology Forum in 2011, and Honorary Member of the Society for Investigative Dermatology in 2012.

Dr. Voorhees divides his time among medical research, patient care, and the education of medical students and physicians training to become dermatologists. His research focuses on psoriasis and premature aging of the skin. The demonstration of psoriasis as a disease mediated by an overactive immune system, treatable by immunosuppressive drugs, has been his major accomplishment in the study of psoriasis. In sun-induced premature skin-aging and in natural aging, he and his colleagues have unraveled mechanisms whereby UV light and the passage of time destroy the skin’s collagen support. This understanding has provided insight into its treatment and prevention by pharmacologic agents.