John Voorhees, MD FRCP has been elected as a fellow of the American Association for the Advancement of Science (AAAS). 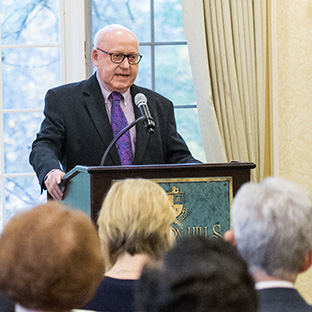 John Voorhees, MD FRCP, Duncan and Ella Poth Distinguished Professor of Dermatology, has been elected as a fellow of the American Association for the Advancement of Science (AAAS). He was elected to this high honor for extraordinary contributions to skin biology and dermatology, in particular psoriasis, the skin response to ultraviolet radiation, and skin aging, and an exemplary and sustained record of leadership in dermatology.

Dr. Voorhees was one of 20 scholars from the University of Michigan and among the 564 scientists, engineers and innovators, spanning 24 scientific disciplines, who were recognized this year by the AAAS. Selection as an AAAS fellow is among the most distinct honors within the scientific community.

In a tradition dating back to 1874, each year the council of the AAAS elects members whose efforts on behalf of the advancement of science, or its applications, are scientifically or socially distinguished. Newly elected Fellows are recognized for their achievements at the ceremonial Fellows Forum, a time-honored event at the AAAS Annual Meeting where they are presented with a certificate and blue and gold rosette.