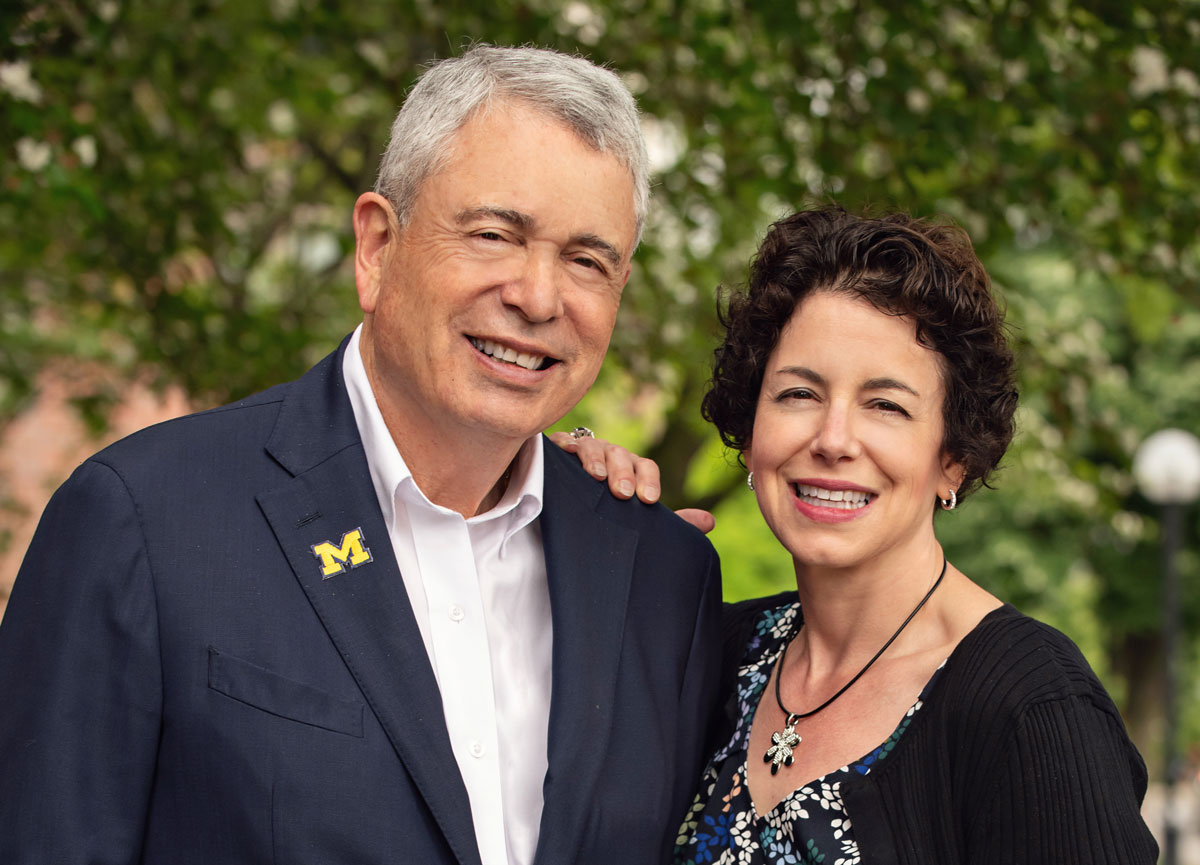 ANN ARBOR, Mich. – Regent Ron Weiser and his wife, Eileen, of Ann Arbor, have committed $30 million to the University of Michigan for diabetes research and the development of life-changing diabetes therapies at Michigan Medicine, in collaboration with other University of Michigan schools and units for diabetes research. The gift — named for Regent Weiser’s daughter who has two sons and a husband with Type 1 diabetes (T1D) — will be used to establish the Elizabeth Weiser Caswell Diabetes Institute, pending approval by the Board of Regents, and advance U-M faculty-led collaborative projects that have the potential for rapid clinical application.

“Elizabeth has been a relentless educator and advocate for people with diabetes and for diabetes research,” said Regent Weiser. “Our family hopes that the collaboration among physicians, researchers, innovators and advocates across campus will allow the work she’s done — and continues to do — to be rewarded with cures for diabetes.” She has served tirelessly on behalf of the diabetes nonprofit JDRF and will be a member of the FY21 JDRF International Board of Directors and vice-chair of the JDRF Research Committee.

The Elizabeth Weiser Caswell Diabetes Institute will centralize and coordinate campus resources — anchored by a group of more than 250 world-renowned, dynamic researchers in diabetes, diabetic complications, obesity and metabolism — and allow U-M to bring new depth and discovery to the quest for answers to diabetes.

“This is one of the most important things that has happened for diabetes research, not just for the University of Michigan, but for the whole country,” said Martin Myers Jr., M.D., Ph.D., director of the new institute. “The institute is built on the idea that we can’t only study one aspect of diabetes, but rather that we need to work together to attack every piece of this disease at the same time. Thus, we will simultaneously work toward making designer insulin-producing beta cells as a therapy for diabetes, seek to understand how to block the onset of Type 1 and Type 2 diabetes, and focus on how to improve clinical care and access to current lifesaving therapies.”

And, to ensure that a new generation of researchers are trained to continue investigations that mitigate the impact of T1D, Elizabeth and her husband, Trey, also partnered with Regent Weiser and Mrs. Weiser to establish the Caswell Family Fellowship in pediatric endocrinology, part of the $30 million commitment.

“The Weiser family has a long history of championing the work of faculty and teams at the University of Michigan through their generosity and proliferation of vital partnerships,” said U-M President Mark Schlissel. “This gift will ensure that U-M is able to translate scientific discoveries into treatments for diabetes that save lives in our community and beyond. I am personally touched by the way this family has translated their personal experience with diabetes into hope for all people, and grateful for their confidence in U-M’s promise to make a difference.”

Ron and Eileen Weiser are longstanding U-M alumni, volunteers and donors, committing more than $100 million to the university to date. In addition to Ron Weiser’s service on the U-M Board of Regents, they both served as vice chairs of the Victors for Michigan campaign and support a wide range of programs across all three campuses of the university, including the Weiser Center for Real Estate, the Weiser Diplomacy Center, the Weiser Center for Emerging Democracies, the Weiser Center for Europe and Eurasia, Michigan Medicine’s Mary H. Weiser Food Allergy Center and the Chad Carr Pediatric Brain Tumor Cancer Center, among other programs. The College of Literature, Science, and the Arts; Michigan Medicine; School of Music, Theatre & Dance; UM-Dearborn; Ross School of Business; Ford School of Public Policy; and dozens of other units have been beneficiaries of the Weisers’ generosity.

The Elizabeth Weiser Caswell Diabetes Institute will build on best practices of the standout programs developed at U-M and other top institutions. As part of the top public university in research spending in the United States, and in partnership with 20 divisions and departments within Michigan Medicine and 14 schools and units across the U-M campus that focus on diabetes care and research, the Elizabeth Weiser Caswell Diabetes Institute will strengthen U-M’s leadership nationally and globally in this space. Several national and international collaborators will work with the U-M and Michigan Medicine teams.

“This gift is transformational,” said Marschall S. Runge, M.D., Ph.D., executive vice president for medical affairs, dean of the University of Michigan Medical School and CEO of Michigan Medicine. “We are immensely grateful to the Weisers for opening the doors that enable our physicians and researchers to push the boundaries that will transition cutting-edge discoveries in diabetes investigations into lifesaving therapies for children and adults.”

Michigan Medicine is known for excellence in research and care for those with diabetes and the complications that it causes.

“Diabetes is so hard. You don’t want to think about complications, but you know they’re out there,” said Elizabeth Caswell, of Ann Arbor. “Diabetes doesn’t allow anybody to shut down and forget about it; there’s no break. Fortunately, the team at Michigan Medicine has been there for us every step of the way — advising us on daily care, advances in treatment technologies, and opportunities for clinical research. Until T1D is cured, we are grateful for top-notch care at one of the best research institutions in the world.”

About Michigan Medicine: At Michigan Medicine, we advance health to serve Michigan and the world. We pursue excellence every day in our three hospitals, 125 clinics and home care operations that handle more than 2.3 million outpatient visits a year, as well as educate the next generation of physicians, health professionals and researchers in our U-M Medical School.

Michigan Medicine includes the top ranked U-M Medical School and the University of Michigan Health System, which includes the C.S. Mott Children’s Hospital, Von Voigtlander Women’s Hospital, University Hospital, the Frankel Cardiovascular Center and the Rogel Cancer Center. Michigan Medicine’s adult hospitals were ranked no. 11 in the nation by U.S. News and World Report in 2019-20 and C.S. Mott Children’s Hospital was the only children’s hospital in Michigan nationally ranked in all 10 pediatric specialties analyzed by U.S. News and World Report for 2019-20. The U-M Medical School is one of the nation’s biomedical research powerhouses, with total research spending of more than $500 million annually.

More information is available at www.michiganmedicine.org