9.1 Definitions of a Study and of a Model

Study: A study describes the data on progression from one state to another state. This information is available in the literature and is usually found as incident counts from a given initial population count that reaches a state by the end of the study duration. Alternatively, study results can be reported in functional form.

Model: A specification of the disease progression created by the user within the system. The progression is defined as a set of states and processes, and of transitions between these states. Transitions hold transition probabilities that describe transition from one state to another.

Since both studies and models describe a disease process, they are bundled together in this system. The system distinguishes between study and model using the Study Length field. A model has a duration of 0, while a study has a duration greater than 0.

Studies contain data regarding part of the disease model studied in the study, and are generally much simpler in structure than models. Actually they are restricted to a single sub-process. Studies are related to estimation projects, where they are used to provide information to estimate unknown model parameters. These parameters can then be calculated during an estimation process. Models with known transition probabilities can be used in simulation projects.

1. From the main window, click the 'Study/Model' on the left navigation pane. 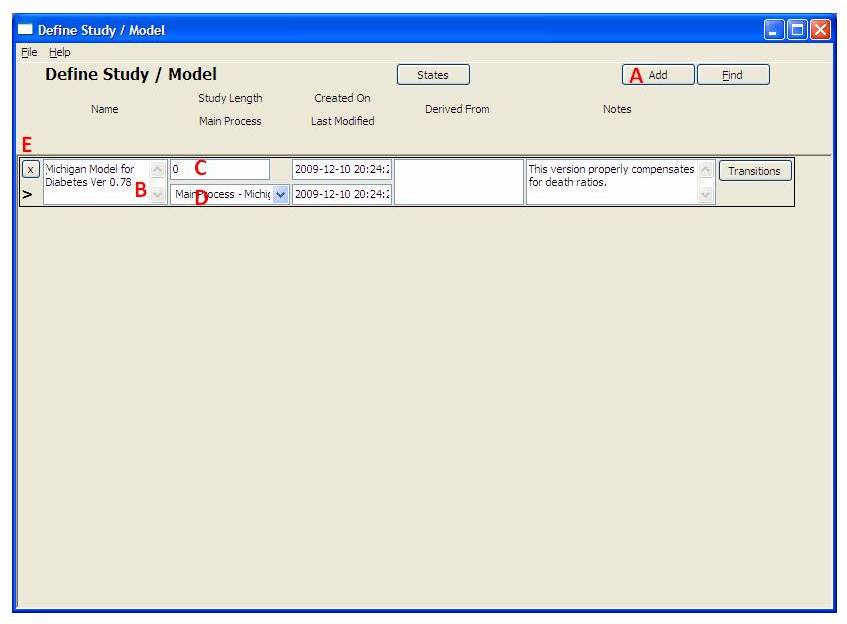 2. This form shows all of the studies and models in the project. To add a new study or model, press the 'Add' button (A), and a new row will appear in the table.
3. Give the study/model a name (B).
4. Set the Study Length (C). NOTE: as stated above, a model has a length of 0, and a Study has a length of greater than 0.
5. Select the Main Process from the drop-down (D). For a Study, The main process can contain only normal states, event states and pooling states. No sub-processes are allowed. The main process of a model can be much more elaborate and contain nested sub-processes. Double clicking on the field will open the states form and allow creation of the requested sub-process. Note that upon return the last state created will appear in the drop box.
6. Click on the Transitions button to define transitions related to the Study/Model. Note that transitions of a study will hold existing information whereas transitions of a model will hold probabilities.
7. Close the form or move to the next record to save the entry. This will trigger validity checking of the data entered and if no error message is displayed, then the data has been saved to memory. Note that the information is not yet saved to a file.

For a video demonstration on creating models, and transitions, click here.

Open the Study/Model form. Identify the row to be removed, and click the 'X' (delete) button for that row. This may require deletion of other entities and may be difficult if the deletion candidate was extensively used.