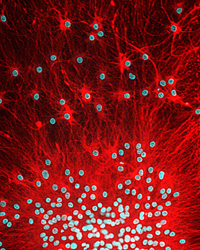 The analysis of the regulation and function of embryonic, adult and more recently induced pluripotent stem cells offers therapeutic potential for tissue regeneration for a broad spectrum of inherited as well as somatically acquired human disorders. The University of Michigan Stem Cell Initiative was conceived and first implemented by the Endowment for Basic Sciences in January, 2003. At that time, the EBS approved initial funding to equip and staff a Core Laboratory whose charge was to begin to acquire human embryonic stem cell lines and to explore the bio-medical uses of these cells as an initial institutional foray into a much larger expansion of the whole stem cell enterprise at the University.

This effort was followed by the acquisition of one of the first nationally competitive Human ES Cell Center awards from the NIH, which was followed shortly thereafter by funding by the EBS of an expanded Stem Cell Initiative in November, 2003. This multi-school effort culminated in 2004, with the formation of the University of Michigan Center for Stem Cell Biology. The Stem Cell Initiative (to date) has funded 14 internal, competitive pilot project grants (which in turn were responsible for the acquisition of several independent NIH grants), has purchased two new state-of-the-art flow cytometers and has contributed to the start up or retention of four outstanding faculty in the field of stem cell biology (Sean Morrison, Cheng-Yu Lee, Ivan Maillard, and Yukiko Yamashita).

With support from the Taubman Medical Research Institute in 2009, the Human ES Cell Center Core was expanded to derive new hESC from donated blastocysts and to derive induced pluripotent stem cells from skin biopsies. More than 20 new hESC lines—many carrying disease mutations—and more than 50 iPSC lines have been derived and characterized. The Core has trained more than 70 scientists from more than 40 units, on campus and off to establish, maintain and differentiate these cells. To broaden the visibility of stem cell research at UM and to provide a forum for interaction and collaboration, the Core also established a monthly “Lunch and Learn” seminar series.

This year, the Core was split into two entities: MStemCell, a Core specializing in hESC derivation (Directed by Dr. Gary Smith and located in the department of OB/Gyn) and the Pluripotent Stem Cell Core (PSCC), located in BSRB and directed by Dr. Sue O’Shea. The PSCC offers hands on training in hESC and iPSC culture and differentiation. Additionally, the PSCC provides advice, technical help and reagents for the generation of new iPSC lines. Both Core laboratories also engage in public outreach as well as student training and education.