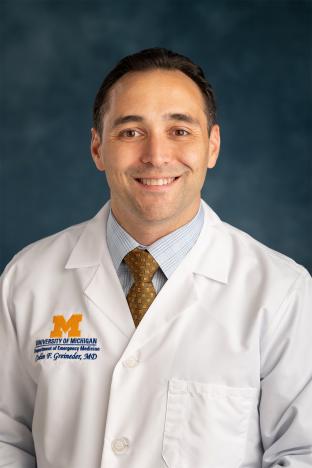 Dr. Greineder attended the Yale School of Medicine, graduating in 2003, and then completed the UMHS/SJMH Emergency Medicine residency program. In 2008, Dr. Greineder moved to the University of Pennsylvania to begin a PhD in Pharmacology, while working as an attending in the Emergency Department. Following the completion of his PhD in 2013, Dr. Greineder began a post-doctoral fellowship in the Institute for Translational Medicine and Therapeutics, during which time he was awarded at K08 Career Development grant from the NHLBI. Dr. Greineder joined the University of Michigan in July of 2018 as an Assistant Professor in the Departments of Emergency Medicine and Pharmacology. His laboratory focuses on the development of novel technologies for targeted delivery of biotherapeutics and drug carriers to the vascular endothelium, with the overarching hypothesis that intervention at the endothelial cell can improve disease outcomes in a variety of emergent and critical illnesses. His laboratory is located within the BioInterfaces Institute at the North Campus Research Complex.