Danger in the blood: U-M scientists show how antibiotic-resisting bacterial infections may form 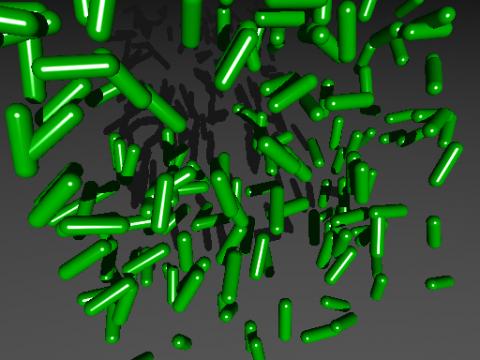 New research may help explain why hundreds of thousands of Americans a year get sick – and tens of thousands die – after bacteria get into their blood. It also suggests why some of those bloodstream infections resist treatment with even the most powerful antibiotics.

In a new paper in the Journal of Infectious Diseases, a team of University of Michigan researchers demonstrate that bacteria can form antibiotic-resistant clumps in a short time, even in a flowing liquid such as the blood.

The researchers made the discovery by building a special device that closely simulates the turbulence and forces of blood flow, and adding a strain of bacteria that’s a common cause of bloodstream infections.

Tiny aggregates, or clumps, of 10 to 20 bacteria formed in the flowing liquid in just two hours – about the same time it takes human patients to develop infections.

The researchers also showed that these clumps only formed when certain sticky carbohydrate molecules were present on the surface of the bacteria. The clumps persisted even when two different types of antibiotics were added – suggesting that sticking together protects the floating bacteria from the drugs’ effects.

When the researchers injected the clumps into mice, they stayed intact even after making many trips through the bloodstream. The clumps -- about the size of a red blood cell -- appeared to survive the filtering that normally takes place in the smallest blood vessels and defends the body against invaders.

“This work demonstrates that if you let bacterial pathogens grow in fluid dynamic environments like they encounter in the bloodstream, they start to take on features that you see in patients,” says John Younger, M.D., M.S., senior author of the new paper and the leader of a team of physicians, engineers and mathematicians who have studied the origins of bloodstream infections for years. “The thing is to grow them in physical conditions that mechanically ‘feel’ like the motion of flowing blood.”

Younger, a professor in the Department of Emergency Medicine at the U-M Medical School, sees plenty of bloodstream infections patients he treats at the U-M Health System’s Emergency Department. Staff at UMHS, like those at all hospitals, clinics and nursing homes, work mightily to prevent and treat  such infections.

Some bloodstream infections begin through cuts and injuries, or even vigorous tooth brushing. Others can be traced to the intravenous lines that hospitals and some clinics use as part of patient treatment.

Most people fight off such infections through natural immunity. But older people, cancer patients, dialysis patients and those who have had surgery or suffered severe injuries are much more prone to developing rampant infections.

The chance of severe infection increases when someone is exposed to a source of infection – such as a central line catheter – that stays in place for days or weeks, giving tens of thousands of bacteria a chance to get into the bloodstream over time. Sepsis, which kills tens of thousands of people a year, can result when an exaggerated inflammatory
response to a bloodstream infection triggers organ damage and failure.

In their laboratory at U-M’s North Campus Research Complex, Younger’s team studies why bacteria can survive and thrive despite the tossing and turning they endure in the blood. Their work is funded by the National Institutes of Health and the National Science Foundation.

Over the past decade, they have created sophisticated mathematical models of the fluid dynamics of the bloodstream, and the conditions needed to promote bacterial growth. They’ve tested those models using different types of containers and methods to simulate bloodstream conditions.

The bioreactor used to produce the new results is called at Taylor-Couette cell, and uses concentric cylinders, one of which is turned by a motor. The researchers added liquid growth medium to the reactor, then carefully controlled the rotation to produce eddies in the liquid that are similar to those of the blood. They then added Klebsiella pneumoniae bacteria, one of the most common sources of bloodstream infection. They tested two antibiotics that doctors often prescribe for sepsis: ceftriaxone and ciprofloxacin. Neither was effective at killing the clumped bacteria.

“The more you can reproduce what bacteria experience when they are in patients, the more you can understand what they are doing, and why they can cause an overwhelming infection in a whole organism,” says Younger. “Once we know how they behave, we can be intelligent about how to grab them out of the bloodstream, and filter them effectively.”

The paper’s authors also include first author and research associate Margaret M. Thornton, M.S., and Charlene B. Irvin, M.D., a clinical lecturer in U-M Emergency Medicine; U-M Medical School graduate Hangyul M. Chung-Esaki, M.D., now at the University of California, San Francisco; David M. Bortz from the applied mathematics program at the
University of Colorado-Boulder, and Michael J. Solomon from the chemical engineering department of the U-M College of Engineering.