New research, led by Alicia Cohen, M.D., M.Sc., tap into a simple way to encourage healthier eating habits among low-income families by promoting a program that increases the value of food stamps when spent on fruits and vegetables. 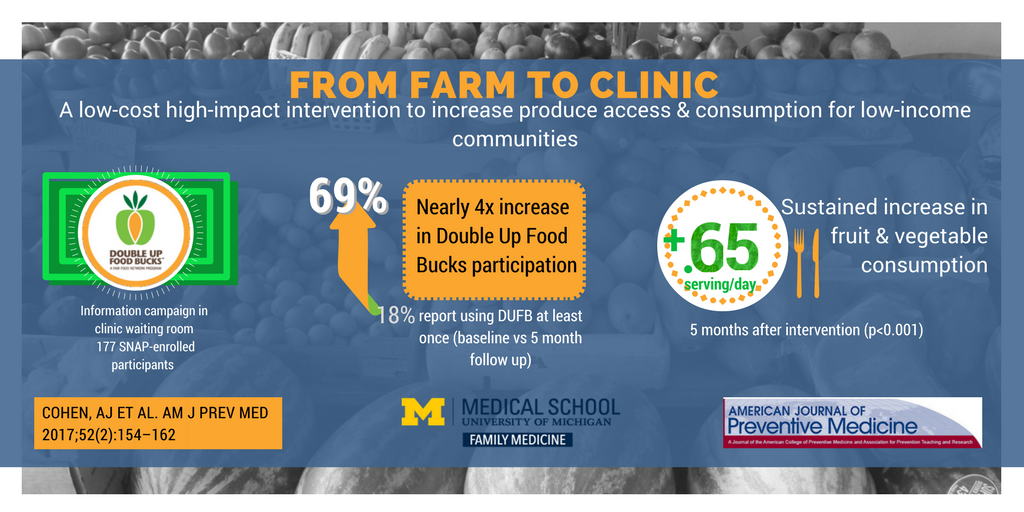 Low-income families were more likely to use their federal food assistance on nutritious food after learning that their dollars can be doubled for more fruits and vegetables, a new study finds.

This brief interaction prompted increased fruit and vegetable consumption and led to an almost fourfold increase in program use among families, according to the findings published in the American Journal of Preventive Medicine.

“Dozens of states now have incentives to encourage healthy eating, but many eligible families do not take advantage of these programs,” she says. “We found that lack of awareness was a major reason for underuse. We heard over and over again, ‘If I had known about this program before, I would have used it a long time ago.’”

The study was based on surveys from 177 participants enrolled in the federal Supplemental Nutrition Assistance Program (or SNAP, formerly the Food Stamp Program) who were approached in a waiting room of a clinic in a low-income, diverse area of southeast Michigan.

Double Up, run by national nonprofit Fair Food Network, is available at more than 200 farmers markets, grocery stores and other retail outlets across Michigan. At participating farmers markets, up to $20 in SNAP funds spent per market visit are matched with free Double Up Food Bucks that can be used to purchase fresh, locally grown fruits and vegetables.

Fruit and vegetable consumption increased among study participants by almost two-thirds of a serving per day — with the greatest increases among those who used Double Up the most.

Cohen notes that diet-related disease, including type 2 diabetes, heart disease, hypertension and obesity, is among the leading causes of death in the U.S. SNAP produce incentives have garnered bipartisan support as a practical way to improve the health impact of the SNAP program. Today, such incentive programs are available in at least 40 states.

“Patients are often pressed to make difficult financial decisions, and fruits and vegetables aren’t always easy to afford,” Cohen says. “Clinicians can be reluctant to screen for social issues they feel unable to address. But there are so many public and private efforts that can help address needs outside the four walls of the clinic.”

“Our work suggests providing information about healthy food incentives at the doctor’s office is a low-cost, easily implemented intervention that may lead to healthier diets among communities at the highest risk of diet-related disease.”

Browse the latest research on preventive medicine for chronic conditions.