A team of health policy researchers from the Institute for Health Policy and Innovation (IHPI), including Tammy Chang, finds new potential impacts of a "Tobacco 21" law in Michigan 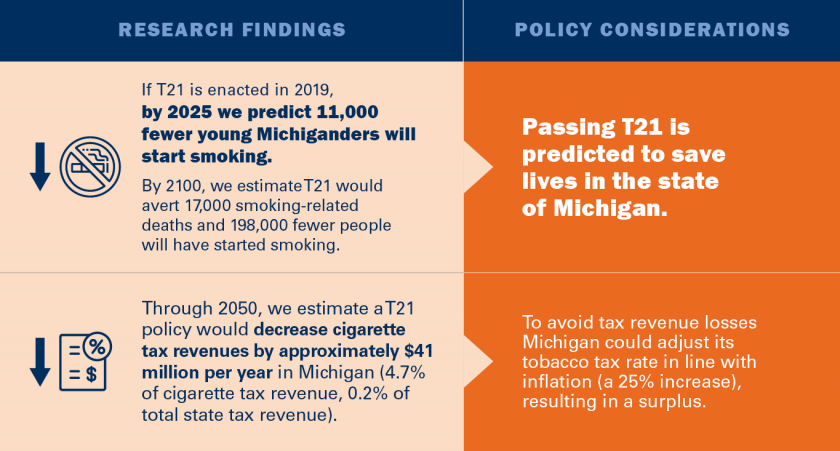 A team of health policy, adolescent health, and public health researchers from across the University of Michigan performed a Policy Sprint on the health and economic implications of a Tobacco 21 law in Michigan.

Restricting sales of tobacco products to people 21 and older could keep 11,000 Michiganders from starting to smoke within five years, potentially avoiding premature deaths in two-thirds of that population, according to a University of Michigan study.

The change would translate into 17,000 fewer smoking-related deaths and 198,000 fewer smokers by 2100, according to U-M researchers who analyzed the potential impact if Michigan were to pass what's often called "Tobacco 21" legislation. Seven states and more than 400 municipalities have already enacted such laws, and a measure was introduced in Michigan's House of Representatives in January.

Researchers say tobacco use remains a major public health concern in Michigan, causing more than 16,000 deaths each year. Compared to the national average, 20 percent more Michigan 12th-graders have smoked a cigarette or cigar, used smokeless tobacco or vaped an e-cigarette in the last month.

"Passing a Tobacco 21 law in Michigan has the potential to save lives, but only if the law is carefully implemented in a way that supports, rather than stigmatizes, the people it affects," said Holly Jarman, assistant professor at U-M's School of Public Health.

Jarman and colleagues conducted a comprehensive analysis of the potential effects of a statewide policy that would limit tobacco sales to people 21 or older, instead of the current age limit of 18. The team examined how smoking habits would change over the next 80 years if the legislation reduced smoking initiation by 10 percent.

In addition, they examined existing implementation of such a policy in four Ohio cities, and conducted a national survey to understand attitudes and opinions toward such a law.

When Columbus, Ohio, passed its Tobacco 21 law in 2016, it was the sixth city to do so in the state. At that time, Jarman says, the policy was paired with the creation of a citywide tobacco retailer license, funding to implement the policy and educate retailers, and clear delegation of enforcement authority to the Public Health Department.

Other cities passing Tobacco 21 laws in the state, like Cleveland, Dublin and Euclid, did not initially enact these policies and found it difficult to match the results delivered by the Tobacco 21 law in Columbus.

To be effective, the researchers say, Tobacco 21 legislation should be part of a comprehensive approach to tobacco control, including unit price increases for tobacco products, strong support for smoking cessation services and prevention activities for affected young people.

"Rather than thinking about Tobacco 21 in isolation, it is very important to think about the best ways to support those who will be affected by any such law, and provide resources to help young people quit if already smoking," said Rafael Meza, associate professor at U-M's School of Public Health and a member of the research team.

To avoid tax revenue losses from lower tobacco sales, the researchers suggest setting the tobacco tax rate to stay in line with inflation.

What do youth think about Tobacco 21?

“The population most likely to be affected by Tobacco 21 policies are younger teens, whose input is largely missing in the debate,” says Chang, an adolescent health researcher.

“That’s where MyVoice comes in.” MyVoice sends a weekly text message survey to over 1,800 youth, ages 14-24, from across the United States. The Tobacco 21 research team leveraged MyVoice to collect responses from 800 youth in September 2018.

About 60 percent of Michigan youth surveyed supported the adoption of a Tobacco 21 policy, mirroring nationwide responses.

•    Half of those under age 18 said people their age obtain tobacco from social sources, such as friends and family, despite the current law.

•    About 75 percent of respondents over 18 said people their age obtain tobacco from brick-and-mortar retailers.

•    Among those who expressed support for Tobacco 21 laws, about 40 percent thought young people are not responsible enough to buy tobacco and roughly 60 percent are concerned about tobacco's health effects.

Chang adds, “Our work on Tobacco 21 is a perfect example of how MyVoice can engage youth in the policy decisions that impact their lives and their health.” 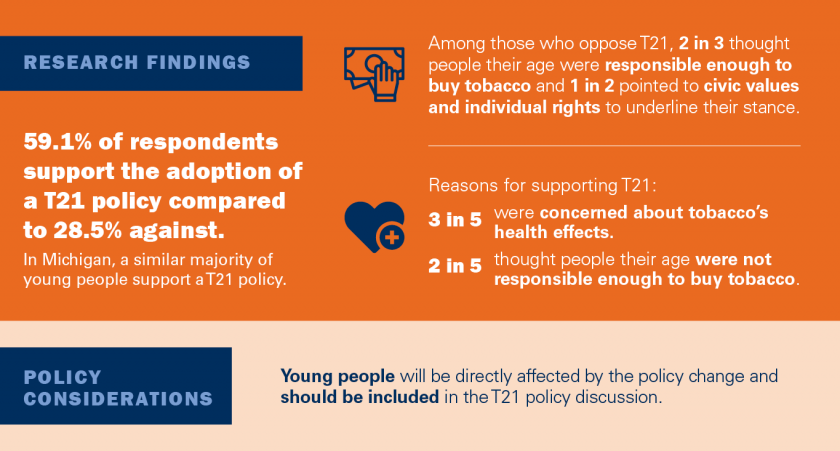 A national survey of nearly 800 people ages 14–24 was conducted in September 2018 via the text message survey platform MyVoice, with an over-sample of Michiganders. The research team evaluated the responses to understand attitudes towards tobacco use and opinions about T21.

A message to Michigan legislators

"A rapidly increasing number of cities, counties and states around the country are passing Tobacco 21 laws," said Jarman, adding that in Michigan, some elected officials have expressed strong support for enacting a Tobacco 21 law.

"If our legislators decide that we should join other states like Virginia and New Jersey in passing Tobacco 21, we urge them to do it in a way that supports young people and communities in our state. That means implementing Tobacco 21 as part of a comprehensive tobacco control policy."

Browse the latest preventive medicine research from the department of family medicine.