After Symposium, Brazil collaborations expected to expand to Emergency Medicine

New international collaborations in Emergency Medicine and Critical Care are likely to emerge from the recent UM-Brazil Symposium held in São Paulo.

The delegation of 25 UMMS physicians and researchers to visit the University of São Paulo Medical School (FMUSP) for the Nov. 29-30 symposium included Emergency Medicine doctors Robert Neumar and Kevin Ward, both members of the Michigan Center for Integrative Research in Critical Care. As first-time participants in the event, they hoped to forge new partnerships with counterparts in Brazil. 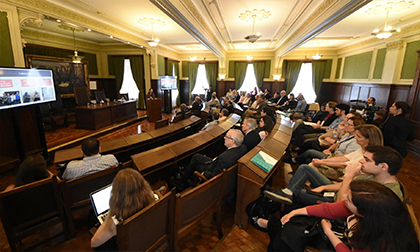 Attendees listen during a session of the UMMS-FMUSP Symposium that took place Nov. 29-30 in Sao Paulo, Brazil.

“We took the opportunity to introduce ourselves with a broad overview of our projects to look for opportunities to collaborate,” said Dr. Ward, MD, Professor of Emergency Medicine. “I was very impressed by their generosity, their interest, and their desire to partner with us.”

Initial seeds for a partnership were sown in 2015, when critical care leaders from the FMUSP visited UMMS and toured the then newly opened Emergency Critical Care Center, a specialized, first-of-its kind unit that provides immediate access to intensive care-level care for patients recently admitted to the Emergency Department. Last year, an FMUSP medical school faculty member spent a month-long observership with the UMMS Emergency Medicine Department. Following the recent symposium, leaders hope to expand the partnership to include more regular educational exchanges for learners and faculty, and ultimately launch collaborative research.

“We see potential opportunities to collaborate across many aspects of critical care on issues like cardiac arrest, sepsis, and severe trauma, as well as testing new devices and technologies,” Dr. Ward said. “Their system is so large that they see cases in numbers that we don’t see here and subsequently have expertise and challenges in various areas that we lack. There’s the possibility of accelerating discoveries and solutions for challenges that both sides see, but at vastly different scales.”

With more than 11 million people, São Paulo is a huge population center and University of São Paulo Medical School Hospital is among the largest hospital complexes in Latin America. UMMS has a large network of partnerships with FMUSP that date back decades, with strong ongoing collaborations in areas like obstetrics and gynecology, physical medicine and rehabilitation, ophthalmology and more. Partnerships have included scholarly exchange programs, joint research projects, and more.

“For me, it was important to see the fruit borne from colleagues in other departments who have engaged in Brazil in recent years,” said Dr. Ward. “That builds confidence because, while it’s easy to talk about doing these things, it is another to actually see a level of productivity. There’s a good balance to show that both sides have been equally enriched by these partnerships and I think the same will hold true for Emergency Medicine.”