An OB-GYN research faculty member has been awarded a grant from the Bill and Melinda Gates Foundation to study Ghanaian women’s contraceptive preferences and how preferences and method-related characteristics are associated with discontinuation. 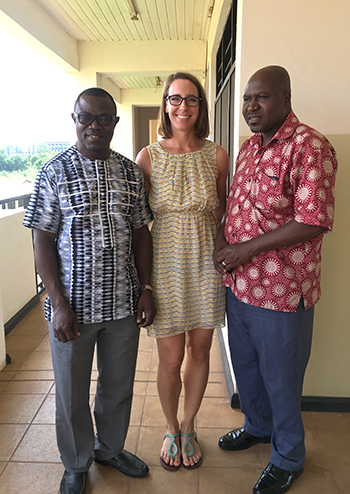 “We aim to better understand women’s preferences for contraception, how well available methods meet those preferences, and where the gaps exist,” said Rominski, PhD.

According to the World Health Organization, Ghana’s maternal mortality rate was 319 per 100,000 live births in 2015 (compared to 14 in the United States) and increasing contraception usage to reduce that figure has become a key focus of the Ghanaian Ministry of Health.

Awarded last month, the $100,000 Gates Foundation Grand Challenges Grant will find Rominski collaborating with colleagues at both the Kwame Nkrumah University of Science and Technology, in Kumasi, and the University of Ghana, in Accra, both longtime institutional partners of the University of Michigan Medical School and the OB-GYN department. The team will conduct surveys of women presenting across several health clinics in both cities.

The new study builds upon prior work the partners did to compare women’s stated contraceptive preferences against their actual choices. That research, published recently in Global Health: Science and Practice, found that many women opted for contraceptive methods with known side effects that they had identified as unacceptable. Among the findings: at least 70 percent of women opting for common contraceptive methods had indicated a likelihood to stop usage if they experienced side effects that are in fact common with their respectively chosen method. In other words, lots of women selected methods they were predestined, based on their own preferences and expectations, to dislike and discontinue.

“Women reported that they hadn’t really been counseled to expect the side effects common with their chosen method,” Rominski said. “What stood out was that providers could do more to communicate potential side effects, ensuring that women are making choices that coincide with their expectations, and also reassuring them that side effects are common and not harmful.”

For the new Gates-funded research, Rominski and her partners will return to those same clinics with a broader longitudinal study exploring not only preferences pre- and post-counseling, but also satisfaction and usage continuation rates after three, six, nine and twelve months.

“Our hope is that this research can help inform the development of potential new contraceptive methods and practices that will increase demand and sustained usage over time,” Rominski said.