Five years after its launch, Ethiopia’s first kidney transplant center is on pace to become self-sustaining by the year’s end, with the U-M doctors who established it handing over the reins to their fully trained Ethiopian counterparts.

The transition will mark a major milestone – not just for healthcare, but for healthcare education in Ethiopia, as surgical transplant specialists trained in-country will be ready to turn around and start training other Ethiopian doctors. 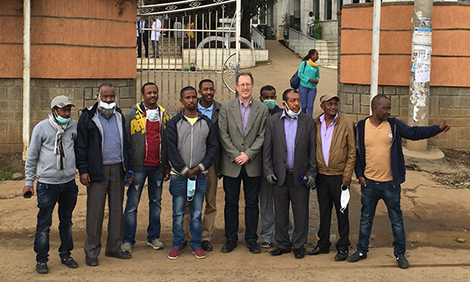 U-M Surgeon Jeffrey Punch (center) and a group of Ethiopian kidney transplant recipients. Punch helped launch Ethiopia's first kidney transplant center at St. Paul's Hospital, where he has been training physicians to perform the procedure on their own.

“What we at Michigan Medicine are the best at, where we shine, is education, and that’s what I’m most proud of about this project,” said Jeffrey Punch, MD, the transplant surgeon who helped build the program and performed the country’s first-ever kidney transplants in 2015. To date, Punch and his team of Ethiopian trainees at St. Paul’s Hospital in Addis Ababa have performed more than 70 transplants, a figure that should rise to nearly 100 by the end the year.

Punch spoke about his extensive partnership with St. Paul’s during a recent Rosenberg Foundation Lectureship event at U-M Hospital, detailing his involvement – and the many challenges – in creating Ethiopia’s first transplant center. He made his first trip to Ethiopia in 2013 to meet with the country’s top health officials. At the time, there were fewer than 20 dialysis chairs in the entire country, all in private hospitals and all unaffordable to the vast majority of Ethiopians. As is many developing countries, kidney failure in Ethiopia has been a near certain death sentence, with few patients surviving beyond six months. Health officials wanted to change that, and were enthusiastic about working with Punch and the Michigan Medicine team to develop a transplant center at St. Paul’s.

“Transplant is actually very cost effective. Compared to dialysis, it’s a great deal because the operation is not expensive and the immunosuppressant drugs required are now available in generics at a very low cost,” Punch said. “The health minister wanted to know how long before we could perform the first transplant. I estimated six months.”

In the end, preparing for the first procedure took more than two years. The set-up required was substantial and the learning curve was steep. At the time, the hospital’s lab operated on limited hours, five days a week; it needed to be available 24/7. Pharmacy services, too, had to be greatly expanded, and Punch pushed hospital administrators to establish the first-ever patient food and beverage program at St. Paul’s.

“They didn’t have meals. We insisted at least on providing beverages. Hydration is pretty important,” Punch said.

A long list of necessary equipment had to be procured, from the delicate vascular sutures required for the procedure to better back-up generators for the OR. Sterile ice from frozen saline solution is needed for organ preservation in any type of transplant procedure. When the team started the project, there wasn’t a freezer in all of Ethiopia cold enough to freeze saline.

“We needed a whole lot of equipment, a whole lot of supplies. With all of these things, I basically underestimated what was required to make this happen,” Punch said. “It really would have been easy at first to get discouraged, but I knew they would get it done eventually. When you’re working in global health. You have to be flexible.” 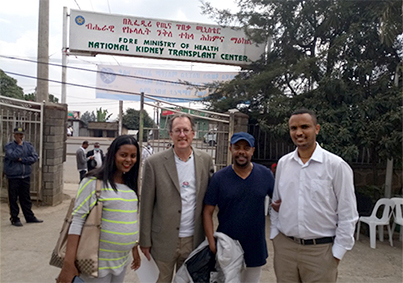 Dr. Punch is pictured in front of transplant center with one of his St. Paul's trainees (white) and the program's first-ever transplant recipient (blue). The photo was taken in September 2017, two years after the man's operation. He is doing well and is now a new father.

The first transplants were performed in September 2015. The fiftieth took place about two years later, in September 2017, and hospital and health officials staged a celebration to mark the occasion. By that time, the transplant center was not only helping those in renal failure, but was providing ancillary benefits for all St. Paul’s patients. ICU best practices, including using care-flow sheets to document a continuum of care, had taken hold throughout the hospital. The expanded lab and pharmacy services were available for all patients, too, as were specialized procedures like spiral CT scans and the radiologists trained to perform them.

Punch still travels regularly to Ethiopia to oversee operations with the team of four St. Paul’s surgeons he has been training from the start. At first, he, along with U-M colleagues like Drs. Ken Woodside and Bob Merion, performed each procedure as their trainees looked on. Today, that scene is reversed. By the year’s end, there won’t be any U-M doctors present, and those observing will be the next crop of Ethiopian fellows.

“When that happens, they will be proud and I’m sure going to be proud and pleased. It’s also a little anxiety provoking. The fellows here will always have a more senior colleague they can call on, but I am confident in their abilities. They’re all superb surgeons who have been motivated from the beginning to do this,” Punch said. “They are very grateful and I am grateful, too. You really do feel like you are enhancing things and making a difference.”