The first team to be awarded a Faculty-Student Travel Grant from Global REACH launched a pair of research projects in Ethiopia to strengthen ophthalmology training and care there. 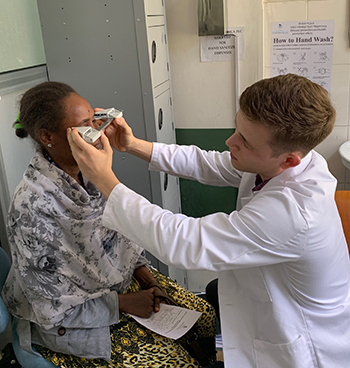 “I wanted to do something in Ophthalmology, and the more I learned about the partnership between Kellogg and St. Paul’s, the more it seemed like an opportunity to be involved in a project that could have a lasting impact,” Heisel said. “This is helping to build a curriculum to train future ophthalmologists in a place that desperately needs them.”

Heisel’s experience, from mid-March to mid-April, was partially funded through a $750 Faculty-Student Travel Grant, a new type of travel award intended to help faculty with ongoing international partnerships engage students in their work abroad. Applications are accepted on a rolling basis.

Working with the St. Paul’s Ophthalmology residents, Heisel helped conduct two research studies. First was an assessment among patients about their knowledge of glaucoma to help guide future public awareness campaigns and training. Second was a study to create a data set of normative anthropometric periocular measurements among the St. Paul’s population. Such measurements (how deep set the eyes are, how close together or set apart they are, how much the eyelids droop, etc.) vary among different races and ethnicities. The dataset Heisel collected from more than 300 patients is the first of its kind  in Ethiopia, home to more than 80 specific ethnicities.

“The idea is to create a set of values that is specific to their unique population. If you don’t know what a normal value is to begin with – or if you are using a set of values derived from a different population – it’s hard to make an accurate diagnosis and treatment plan,” Heisel said.

At least two manuscripts are anticipated from the projects, work to be co-authored by Heisel and the Ethiopian residents he worked with on the respective studies. Research is a required component of St. Paul’s young ophthalmology residency program, which is expected to produce its first-ever graduates this summer. Heisel, coming off from a yearlong research fellowship as part of his MD program, was able to put his newly developed research skills to use to the mutual benefit of himself and his St. Paul’s colleagues. 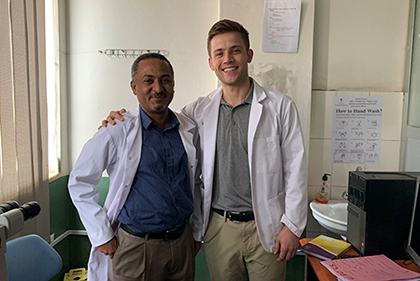 UMMS student Curtis Heisel with St. Paul's oculoplastic fellow  Dr. Asrat Sime, a collaborator on the research Heisel carryed out during his experience.

“We needed a project that could be completed in a month and that would be meaningful for the St. Paul’s residents and for their patients,” Nelson said. “They accomplished a great deal in limited time frame.”

Heisel is set to present about his work during a Kellogg Eye Center research day event in June and again at the Kellogg International Night event in September.

“It was a great research experience, and beyond that, an opportunity to meet new colleagues and gain insight into a different health system,” he said. “Seeing how a hospital functions in a country like Ethiopia provided an immense amount of perspective that I will carry with me for years to come. They face barriers that American physicians never encounter, and come up with innovative and creative solutions that are inspiring.”