Students, professor team up to launch Medicine in Spanish course

Communicating medical concepts is hard enough when a physician and patient share a common language. Add a second language to the mix, and it gets much more complicated, something Manuel Valdivieso knows firsthand.

Educated in his native Peru, Valdivieso went on to residency in the United States where he quickly learned how his limited mastery of English – particularly English abbreviations and conversational slang that are less common Spanish – also limited his interactions with patients. 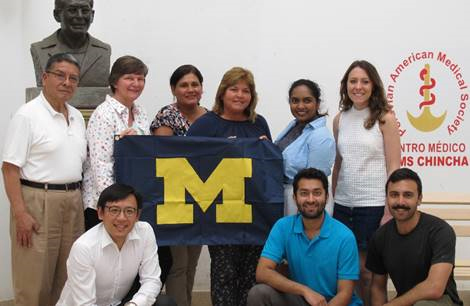 Adjunct Professor Manuel Valdivieso (left) in Peru with a team from the U-M William Davidson Institute. Valdivieso is helping UMMS students launch a Medicine in Spanish course this fall.

“When I got to Chicago, the patients didn’t understand my English. I had a solid knowledge of medicine, but my difficulties communicating made it much harder to help them,” he said. “It was so important that I had an attending physician who was kind and patient to sit with me and teach me.”

Today, Valdivieso, a longtime Professor of Internal Medicine at Michigan Medicine, is set to put that personal experience to good use in reverse – teaching students the Spanish language skills they need to interact with Spanish-speaking patients. Valdivieso is working with UMMS students to launch a new Medicine in Spanish elective that promises to meld conversational Spanish-language skills with nuanced medical terminology to improve care for Spanish-speaking populations.

Set to launch this fall, the program replaces a similar medical Spanish elective that was discontinued a few years ago. At the forefront of the effort to resurrect it have been student leaders in the UMMS Latin American & Native American Medical Association (LANAMA), including M3 Robert Porter.“I’m passionate about helping students because I was in their shoes, trying to conduct examinations in a language that was not my first language. There is a big difference between learning just enough of a new language to get by and becoming fluent enough to conduct an entire patient interview and exam,” said Valdivieso, MD, who holds an appointment as Adjunct Professor at Michigan Medicine and remains active volunteering in Peru.

“The Spanish-speaking community represents a big vulnerable population,” said Porter, who studied Spanish as an undergraduate student. “I’ve done patient histories in Spanish and it can be emotional. Sometimes, they’ve not had the experience of seeing a provider who speaks Spanish, and being able to explain their health issue in their native language means so much.”

An informational meeting for students who want to learn more about the new program will take place Aug. 27 at 5 p.m. in the Taubman Health Sciences Library (room 5000). The program itself is set to kick off in September with weekly sessions running through the spring. It is open to all UMMS students, but the curriculum is designed for those who already have a grasp of conversational Spanish. 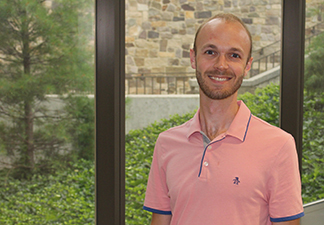 Contact M3 Robert Porter for more information on the course.

“The course is intended for people who are conversationally fluent, teaching them the medical Spanish they would need to conduct an interview and examination in Spanish,” Porter said.

Much of the course will involve role-play scenarios, but Valdivieso hopes to give participants firsthand experience with Spanish-speaking patients as well. He visits Peru  several times each year to volunteer at a clinic he helps to manage in Chincha, south of Lima, and plans to allow the students in the class to participate in patient exams via video conferencing. He and some of the course organizers have already tested the technology.

“They interviewed a patient with me there. From my perspective, it went  very well,” Valdivieso said. “The plan is that when I’m in town, I’ll be leading the classes in Ann Arbor. When I’m in Peru, we’ll be video-conferencing from the clinic.”

Down the road, Valdivieso hopes to create more opportunities for students to get involved in his work in Peru. But whether it is video-conferencing with patients in South America or conducting in-person examinations with patients closer to home, Medical Spanish is an increasingly important skill for physicians. The United States currently has more Spanish speakers than Spain and is predicted to have the most Spanish speakers in the world by 2050.

“For me, leading this class is a good way to give back to the next generation and help a vulnerable patient population,” Valdivieso said. “No matter where you practice, whether in Michigan, Florida, California or Texas, there is a growing need for physicians who are able to communicate with Spanish-speaking patients in their own language.”