Michigan Medicine’s partner institution in Ethiopia has graduated its first-ever ophthalmology residents with help from the Kellogg Eye Center (KEC).

The milestone graduation is the culmination of a five-year collaboration with St. Paul’s Hospital Millennium Medical College involving many KEC faculty led by Professor of Ophthalmology and Oculoplastics Surgery Christine Nelson, who was at St. Paul’s for the Sept. 1 ceremony to celebrate the initial cohort of six. 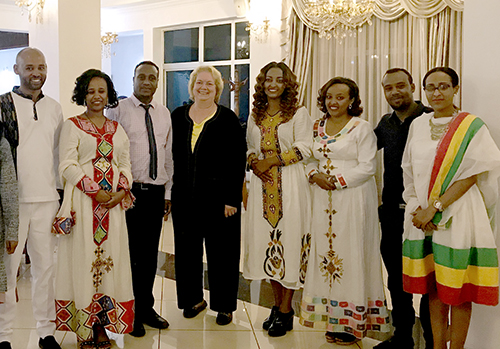 “The program was in Amharic, so of course it was difficult for me to understand most of it. But I understand the words ‘thank you’ and I heard that a lot,” said Nelson, MD, FACS. “It felt really good to see how far the program has come, to see how accomplished they are, and to help them celebrate their achievement.”

The residency Nelson helped launch five years ago at St. Paul’s remains one of only a handful of ophthalmology programs in a country where specialty training among physicians is uncommon and in-country opportunities for such training is rarer-still.

“There are only about 150 ophthalmologists in the entire country, so adding even six at a time is a big deal,” Nelson said. “Like anything else, it is difficult to be first. There were challenges, and it made the six of them very close as a class. I am so proud of them.”

“I’m so grateful for the level of support we received from my colleagues,” Nelson said. “Everyone I approached said, ‘How can I help?’ And the impact has just been phenomenal. It’s one of the reasons I am thankful to be part of U-M. People are so generous with their time and expertise.”

The six graduating residents will now go on to serve in the various hospitals that sponsored their residencies. Behind them are more than 20 other trainees in various stages of the program, as well as an Ophthalmology Department at St. Paul’s that is much more sophisticated than when it was first formalized five years ago. That allows for a deeper partnership that includes learner exchange and meaningful research. One project already underway is a retinoblastoma cancer screening program for Ethiopian children using artificial intelligence software developed Ann Arbor.

And of course, Nelson said she expects Kellogg Eye Center faculty will continue to occasionally visit St. Paul’s to help facilitate portions of the residency program.

“I think there is potential for people who want to continue to be involved across many specialties and I would like to see that,” she said. “For me, teaching and coming to know these residents over the past four years has been rewarding. The lessons go both ways. There’s a lot to learn from them about being a better teacher and a better faculty member.”