"U-M is home to me': Senait Fisseha on how U-M shaped her career

The head of international giving at one of the country’s largest charitable organizations was recently in Ann Arbor to speak about how her Michigan Medicine experience shaped her career and current job.

Adjunct Professor of Ob-Gyn Senait Fisseha, now the Director of International Programs for the Susan T. Buffett Foundation, returned to UMMS Sept. 17 to deliver the keynote speech during Kellogg Eye Center’s annual International Night event. Fisseha, MD, JD, completed her Ob-Gyn fellowship training at Michigan Medicine in 2006 and became part of the Ob-Gyn faculty until taking on her current role at the Buffett Foundation in 2015. 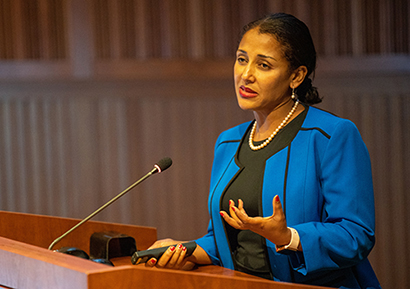 “Although I had done training and other things before coming to Michigan, my story only began crystalizing in terms of what I thought I wanted to do once I arrived at U-M,” she said. “Home is where your story begins, and the University of Michigan is home to me.”

Fisseha spoke for more than 30 minutes to about 100 students and faculty engaged in international collaborations. A native of Ethiopia, she was instrumental in establishing an Ob-Gyn residency training collaboration between UMMS and St. Paul’s Hospital Millennium Medical College in Addis Ababa, the Ethiopian capital. That partnership soon expanded to include training for other disciplines including gastroenterology, radiology, transplant surgery, ophthalmology, and many others.

“Thanks to the enormous generosity of the faculty, residents and leadership of the University of Michigan, within four years, we had launched 14 residency programs at St. Paul’s,” Fisseha said.

Fisseha was also the founding director of the U-M Center for International Reproductive Health Training, which expanded the Ob-Gyn training model beyond St. Paul’s to other medical schools in Ethiopia and beyond. That success prompted a call from the Susan T. Buffett Foundation to manage their international programs, but Fisseha at first was not interested.

“I said, ‘Why? I’m happy here.’ I never, ever, ever imagined leaving the University of Michigan,” she recalled. “But my husband said, ‘You will be damned. Here is a girl born and raised in Ethiopia given this opportunity to have an impact managing three or four hundred million dollars to improve health of women and girls across the world. And you’re going to turn it down?’”

She didn’t. Shortly after joining, Fisseha came to realize a few things about the state of global health beyond academia. The first revelation, she said, was the glaring shortage of women in positions of authority. 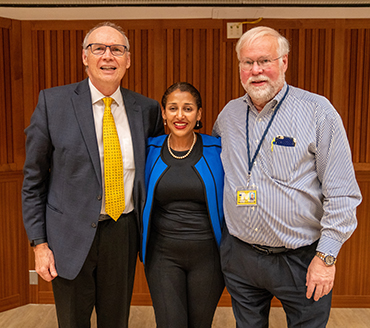 “It is amazing. Across the world, most healthcare is delivered by women, but it is led by men,” Fisseha said. “An analysis of 140 global health agencies found that, although 70% of the work is being done by women, only 20% women hold leadership positions. We can do better, right?”

A second realization was that the kind of commitment to broad health systems and capacity building supported by U-M is too often the exception – not the rule – in global health. Too much money, Fisseha said, is spent on temporary programs designed to address individual diseases rather than long-term solutions to broadly increase healthcare capacity.

“Too often, instead of training doctors and nurses for the long-term, we do short-term training, and so the moment the funding is pulled, everything collapses,” she said. “My lens had always been Michigan, and I have news for you: global health is not practiced anywhere else in the world the way it is practiced in Michigan. Even now, I try to take what I learned at U-M and look for opportunities to reshape and disrupt global health for the better.”