Heisler takes on expanded role with Physicians for Human Rights

A UMMS faculty member has been selected as the next Medical Director of Physicians for Human Rights (PHR), the prominent, nonprofit organization that uses medical science to document, investigate, and advocate against human rights abuses around the world. 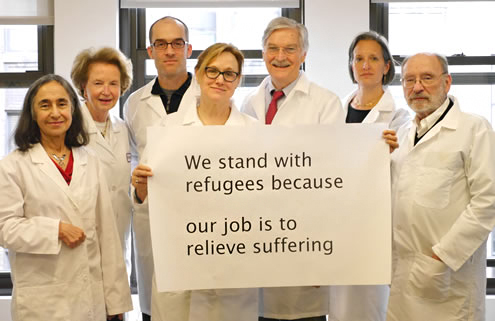 Michele Heisler with colleagues at PHR, where she has been active for years. Starting this year, Heisler's role at the organization has expanded.

Michele Heisler, Professor of Internal Medicine and Health Behavior and Health Education, began her part-time position at PHR on Jan. 1, 2020. She is not leaving U-M, but will remain on faculty at Michigan Medicine and split her time between Ann Arbor and the PHR headquarters in New York. The organization has teams engaged around the world on issues from refugee care to detainee torture and sexual violence. PHR shared in the Nobel Peace Prize in 1997 for its leading role in an international campaign to ban landmines.

For Heisler, this new role is the culmination of a lifetime advocating for vulnerable populations both at home and abroad. While much of her work through Michigan Medicine has focused on improving chronic disease management and prevention in low-resource settings,  Heisler has always remained active in human rights and health equity issues, from her work with the Ann Arbor VA to her research in low-resource communities of Brazil, as well as her advisory role at the U-M Asylum Collaborative and her long research partnerships with Detroit’s Community Health and Social Services (CHASS) Center.

“If you look at a lot of my research, it has really focused on improving health and well-being among vulnerable patients, promoting health equity, and addressing social determinants of health. Building strong protections for human rights is supporting the most fundamental social determinant of health that there is,” said Heisler, MD, MPA. “Human rights research and advocacy have always been part of my work, so for me this is a long-held dream to dedicate even more attention to these issues and contribute to the impact an organization like PHR is able to have.”

As Medical Director for PHR, Heisler will help coordinate the many physician investigators around the world who work with PHR to ensure the scientific rigor and clinical expertise of PHR's investigations. These teams undertake projects such as documenting atrocities against health workers and attacks on health care facilities in Syria, conducting population-based surveys of displaced Rohingya communities in Bangladesh, investigating treatment of asylum seekers along the US-Mexico border, and training and helping forge multi-sectoral collaborations among clinicians, lawyers, police, and judges to effectively document and investigate cases of sexual violence and prosecute perpetrators in countries like the Democratic Republic of the Congo (DRC) and Kenya. Dr. Denis Mukwege won the 2019 Nobel Peace Prize for his efforts toward "ending the use of sexual violence as a weapon of war and armed conflict" in the DRC, work done in close collaboration with PHR.

Heisler will also work to expand and globalize the team of medical and scientific experts working with PHR. She has been a member of the organization’s board of directors for a decade and has been working on individual PHR projects much longer.

Her involvement with PHR dates back to the early 1990s, when she traveled as a Harvard medical student to Turkey with a group of doctors who were examining violations of medical neutrality and assessing forensic evaluations of detainees. The project team, led by Dr. Vincent Iacopino, produced a 1996 paper in JAMA documenting that Turkish doctors were often coerced to ignore, misrepresent, and omit evidence following their examinations of detainees in order to conceal torture.

“We did not engage many medical students in our field work then, so it was a fairly special thing for Michele to be allowed to do that. But she exuded so much talent, sincerity and commitment that we made an exception,” Iacopino said. “She was a real force.”

Through PHR, Iacopino and Heisler have since co-authored more than 15 significant papers, exploring women’s rights under the Taliban in Afghanistan, discrimination against HIV-infected populations in Botswana, use of excessive force against demonstrators in Turkey, and human rights violations perpetrated against members of the non-Arabic minority population in Darfur. Iacopino, the longtime Medical Director of PHR who retired at the end of 2019, is assured that his life’s work remains in good hands.

“Personally, it has been so rewarding to be a part of Michele’s career development. I am elated to pass the torch to her,” he said. “She is so brilliant and talented and will be able to carry on the work that we’ve been doing for the past 33 years. And expand it.”

Having a UMMS faculty assume a leadership role in this internationally acclaimed human rights organization is a feather in the cap of U-M, said UMMS Senior Associate Dean of Education and Global Initiatives Joseph Kolars.

“We are incredibly proud of Dr. Heisler and her well-deserved opportunity to assume a leadership role at Physicians for Human Rights,” said Kolars. “UMMS has long benefited from Michele’s expertise and passion. Being able to more fully share that expertise with PHR will no doubt be a win-win for their organization, for Michigan Medicine, and especially for the most vulnerable populations around the world.”

Moving forward, Heisler plans to spend one to two weeks of each month in New York City at PHR. One of her early goals will be to bring her ample research skills and experience to bear across the organization.

“They wanted an academic with research experience,” Heisler said. “A lot of my work will be with the research and investigation program, expanding our network experts in order to build in more peer review at every stage – proposal, study design, analysis, and publications – to ensure the scientific rigor of everything that PHR does. I am also excited to help design, secure funding for, and lead new projects.”

That could mean more opportunities for U-M faculty and trainees to get involved with human rights studies through PHR. Heisler is already mentoring one UMMS student who is working on a PHR project exploring the health consequences for immigrant children separated from their families at the southern US border.

“A lot of students, residents, fellows, and faculty members are eager to get involved in this work, and my hope is to be able to increasingly involve our trainees and faculty in these studies because there is a great need,” Heisler said.