A faculty member with active partnerships and an extensive network of professional relationships in Brazil has been designated to help foster and expand University of Michigan Medical School collaborations in that country. 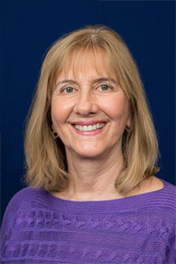 “We are delighted that Dr. Tate has agreed to work with Global REACH. She has long been a valuable member of our global health community of practice at UMMS,” said Kolars, MD. “Through her own experience creating and maintaining successful partnerships in Brazil, Denise has a wealth of expertise and experience that will benefit all our Global REACH Faculty Associates, and particularly those engaged in Brazil.”

Tate takes over Platform Lead responsibilities for Professor of Internal Medicine and Health Behavior & Health Education Michele Heisler, MD, MPA, who recently took on a new role that finds her splitting her time between U-M and the non-profit Physicians for Human Rights.

“I’m interested in maintaining the relationships we have in Brazil, as well as fostering new ones and seeking ways that we can grow these partnerships together,” said Tate, PhD. “It’s a new challenge for me and something that I really look forward to. I’m very passionate about international research collaborations. Such partnerships have played an important role in shaping my own career.”

Tate received a master’s in psychology in her native Brazil before studying on a Fulbright scholarship in the United States, where she ultimately attained her PhD. She served as the Attending Psychologist for the Spinal Cord Injury (SCI) Unit at University of Michigan Hospital and developed her own line of research on SCI, specifically exploring the psychological aspects of adjustment as well as quality of life outcomes after injury. Her current international research collaboration involves assessing the quality-of-life among spinal cord injury patients across the United States, Brazil, Australia, and the Netherlands. This research is funded by the Craig H Neilsen Foundation in the United States.

Tate and her research partners, including collaborators at the University of Sao Paulo Medical School, have developed and are validating the International SCI Basic Data Set designed to uniformly assess patients’ post-injury quality of life around the globe. More than 550 patients from the four different countries are participating in this project. More recently, Tate presented some of the preliminary findings at the 58th Annual Meeting of the International Spinal Cord Society (ISCoS) in France this fall. The International SCI Data Sets initiative includes data sets to assess impairment and functioning of patients with spinal cord injury and disease. With her Brazilian colleagues, Tate has translated several of the data sets for use across both countries (US and Brazil) thus, ensuring uniform data collection methods to facilitate data comparisons for research and clinical care. This initiative is now also part of the NIH National Institute of Neurological Disorders and Stroke (NINDS) Common Data Elements approach to research.

“We needed a common language to be able to compare results internationally, because one of the interesting things we found is that quality of life is defined differently in different parts of world,” she said.

“When they first created all of these data sets for patients with spinal cord lesions, it was mostly physicians getting together and deciding what to measure: cardiac function, digestive function, bowel function and so on. But they didn’t give much thought to psychological well-being, which is huge,” said Tate. “We’ve created a task force to develop a data-set specifically for psychological function to be used around the world.” Another effort involves working with colleagues through the International Society for Spinal Cord Injury to develop a standardized psychological function data set to foster international research collaborations.

“When they first created all of these data sets for patients with spinal cord injuries, it was mostly physicians getting together and deciding what to measure: cardiac function, digestive function, bowel function and so on. But they didn’t give much thought to psychological well-being, which is huge,” said Tate. “We’ve created a task force to develop a data-set specifically for psychological function to be used around the world.”

As Brazil Platform Lead for Global REACH, Tate will look to leverage her international research experience and connections to  benefit UMMS colleagues across many disciplines. There are active partnerships and projects with Brazilian colleagues in ophthalmology, cancer research, palliative medicine, emergency medicine, and more. Many, though not all, of those collaborations are centered on the University of Sao Paulo, where Tate’s international partnerships are focused.

“I think we in the United States have a lot to learn from other countries and their creative solutions to problems. That’s one of the reasons I’m excited about this new role,” said Tate. “We shouldn’t be so insulated as to not look beyond our borders. There are things to be learned from other countries, just as they do from us.”