How quickly does coronavirus spread? A U-M data science fellow works to answer the question

As the novel coronavirus (COVID-19) spreads around the world, a growing number of researchers are using computational models to estimate the illness’ reproduction value (R0), a measure of the average transmission rate. 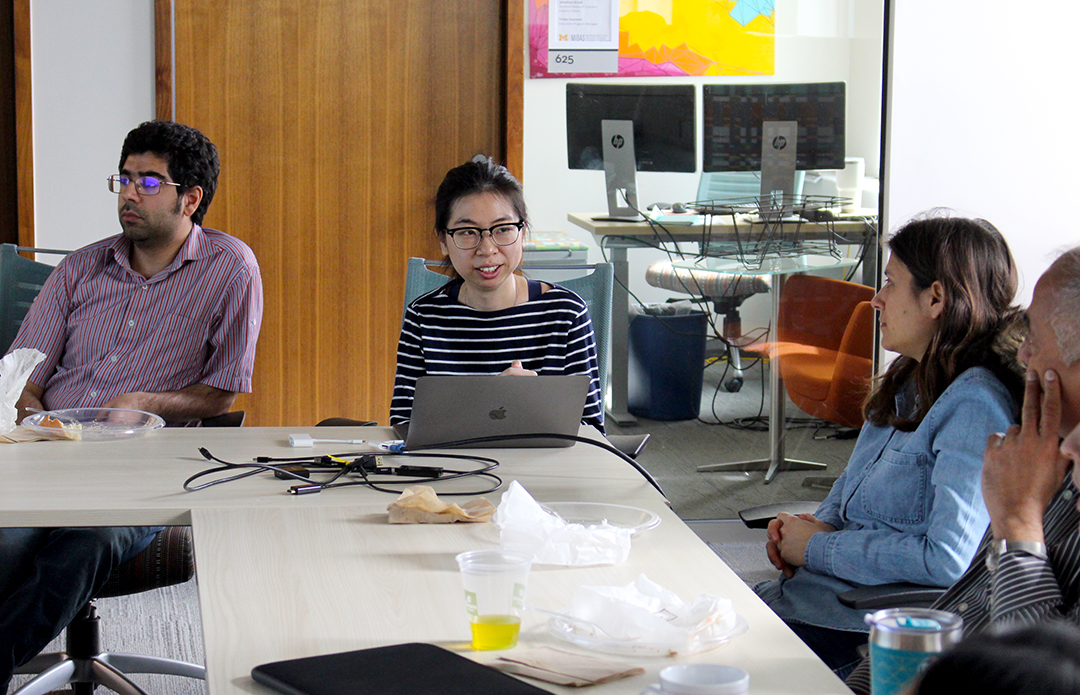 Qianying Lin, PhD, a research fellow at the Michigan Institute for Data Science, presents to U-M colleagues about her coronavirus research.

Among the first to publish on the subject is a team of Hong Kong- and China-based researchers that also includes University of Michigan researcher Qianying Lin. A graduate of Hong Kong Polytechnic University, Lin specializes in using mathematical and statistical models to forecast epidemiological trends. For the past several weeks, she has been working with international collaborators to estimate the transmissibility of COVID-19.

By their estimates, first published in January, every infected person at the early stage of the outbreak can reasonably be expected to pass the virus along to 2-3 others. Their work has been cited multiple times by other teams working to paint an accurate picture for health officials ahead of the disease’s continued spread.

“The basic reproduction number is an important property of infectious diseases, especially for the emerging ones,” said Lin, MPhil, PhD, a research fellow at the Michigan Institute for Data Science (MIDAS). “Unlike other studies that estimated the number as high as 5-6, we have a modest estimation because we took the reporting ratio – which was low at the early stage – into account.”

Their initial estimate, published in January in the International Journal of Infectious Diseases, put the range at 2.24 to 3.58. A second paper published the following month in the Journal of Clinical Medicine accounted for a rapidly increased virus reporting rate in Wuhan and produced a narrower range: 2.49 to 2.63. (By comparison, seasonal influenza has a similar R0 of 2-3 while the highly contagious measles virus has a value of 12 or more.)

Led by Hong Kong Polytechnic University Associate Professor Daihai He, the team includes researchers scattered across several universities and institutions in China and Hong Kong, in addition to Lin. They collaborate primarily on the Chinese social media platform WeChat.

“I was recruited by Dr. He in late January, right after the lockdown of Wuhan. It is intense to work on emerging infectious diseases,” Lin said. “The results not only have the potential to influence the academic world, but also the public at large, which could cause panic. We hesitated a lot and tried our best to send out the right attitude toward the novel disease, while at the same time keeping our research open and rigorous.”

Lin’s role on the project has been to program and run the simulations, work that is ongoing. Her latest models, published in March, account for actions taken to combat the spread of the virus, both individual (i.e., self-isolation) and government ordered (i.e., transportation shutdowns, quarantines, etc.). This study predicts that the outbreak in Wuhan can be completely controlled (i.e., no more new cases for an extended period) by the end of April given continued stringent governmental actions.

The work is closely related to Lin’s primary research at MIDAS, which entails combining traditional case reporting information with genetic data to produce even more accurate disease models. Her experience working on coronavirus has emphasized the need for these more sophisticated approaches, because early reporting deficits, lags, or inaccuracies can make modeling emerging diseases like COVID-19 difficult.

“The reported ratio in the current epidemic is changing frequently, as is the criteria for admission in hospitals,” she said. “The incorporation of genetic data could help to narrow the gap between the model and the real-world circumstances of the epidemic.”