A recent webinar event conducted by Michigan Medicine’s chief of hand surgery was viewed live across more than 30 countries and reflects how one field is adapting global health efforts for the pandemic era. 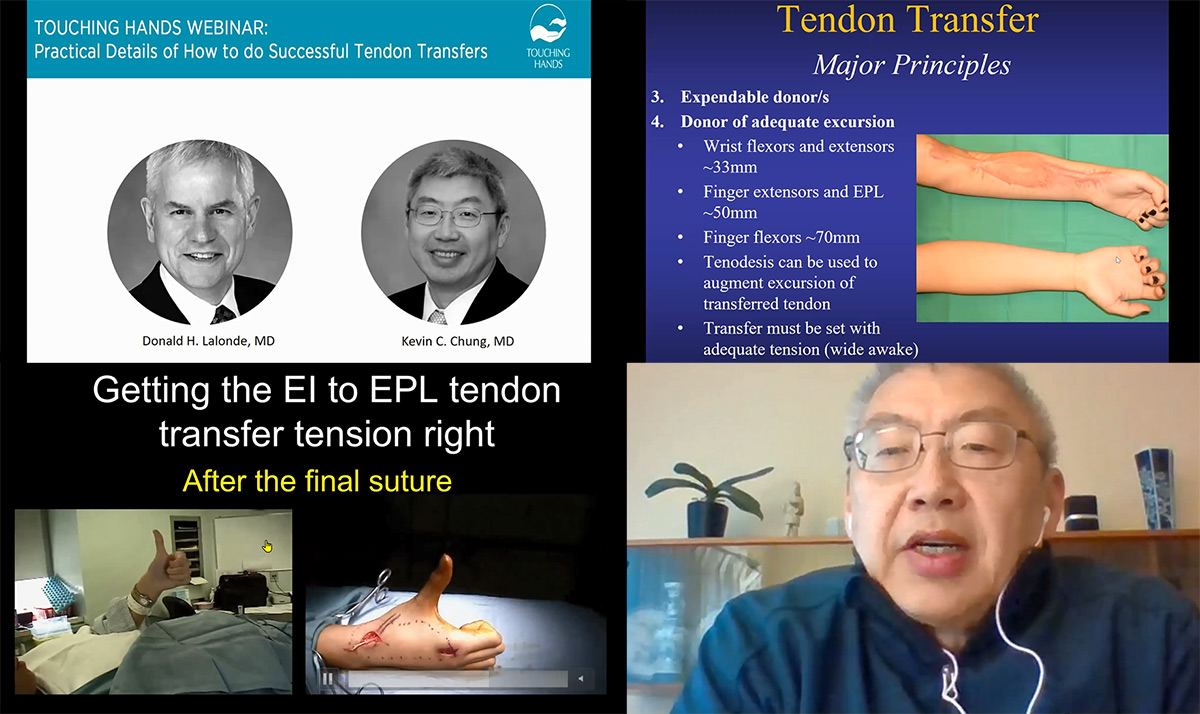 Hosted May 30 by UMMS Professor of Surgery and President-Elect of the American Society for Surgery of the Hand (ASSH) Kevin Chung, the event drew more than 300 participants from around the world, from Singapore to Saudi Arabia, Mozambique to Macedonia.

“Hand surgery as a field has typically been a proponent of traveling to other parts of the world to treat patients and to teach local physicians. Our Society typically invests in 10-15 such trips each year,” said Chung, MD, MS. “Unfortunately, travel isn’t an option right now. So we sent an announcement to every center we’ve served in the past that we were putting on a webinar about tendon transfer.”

They selected tendon transfer – a procedure that relocates a working muscle and tendon to replace a non-functioning muscle and tendon – based on a recent international survey to discern what topics would be of most interest to physicians low- and middle-income countries. Both the survey and the resulting webinar were led by Dr. Chung through ASSH.

“We’d long been discussing the need to be more thoughtful about what we’re focusing on as educators in these parts of the world. The typical model is that we teach whatever our own interest or specialty is, but is that they really want to learn?” Chung said. “The survey was essentially, ‘How about you tell us what you would like to learn?’”

The resulting list of global hand surgery priorities was heavily focused on trauma: nerve damage repair, flaps or grafts to cover wounds, burn treatment, tendon transfer and so on.

“Things just meshed. After the pandemic hit and travel was restricted, we happened to have this list of things they wanted to learn,” Chung said.

Conducted via Zoom, the webinar included a one-hour foundational lecture on tendon transfer, followed by another hour for questions and answers. The Q and A portion, in which session leaders solicited questions via the webinar’s chatroom, was particularly robust, Chung said.

“So often during in-person sessions, we get very few questions. I believe at times people are intimidated to speak up,” Chung said. “But the relative anonymity of the online session removes that barrier – they don’t feel as exposed in front of their peers. We could have spent another hour answering questions.”

The webinar’s 338 participants logged in from all over the world: three surgeons from Kenya; seven from Japan; one from Haiti; four from Argentina; a dozen from Egypt. There were 42 participants from Indonesia alone.

The session was recorded so participants can refer back to it. Future events are being planned to focus on other high-impact topics of broad interest.

“We learned quite a bit by doing this. It demonstrated so many possibilities for the future,” Chung said. “Do I think webinars will replace in-person visits? No. But a hybrid model where much of the foundational learning is conducted remotely would save both time and money. It could help make time spent in-country even more productive.”