Dr. Richard Adanu, who did a portion of residency in Ann Arbor and has partnered with many Michigan Medicine colleagues in Ob-Gyn and other disciplines, has been named Rector for the Ghana College of Physicians and Surgeons. 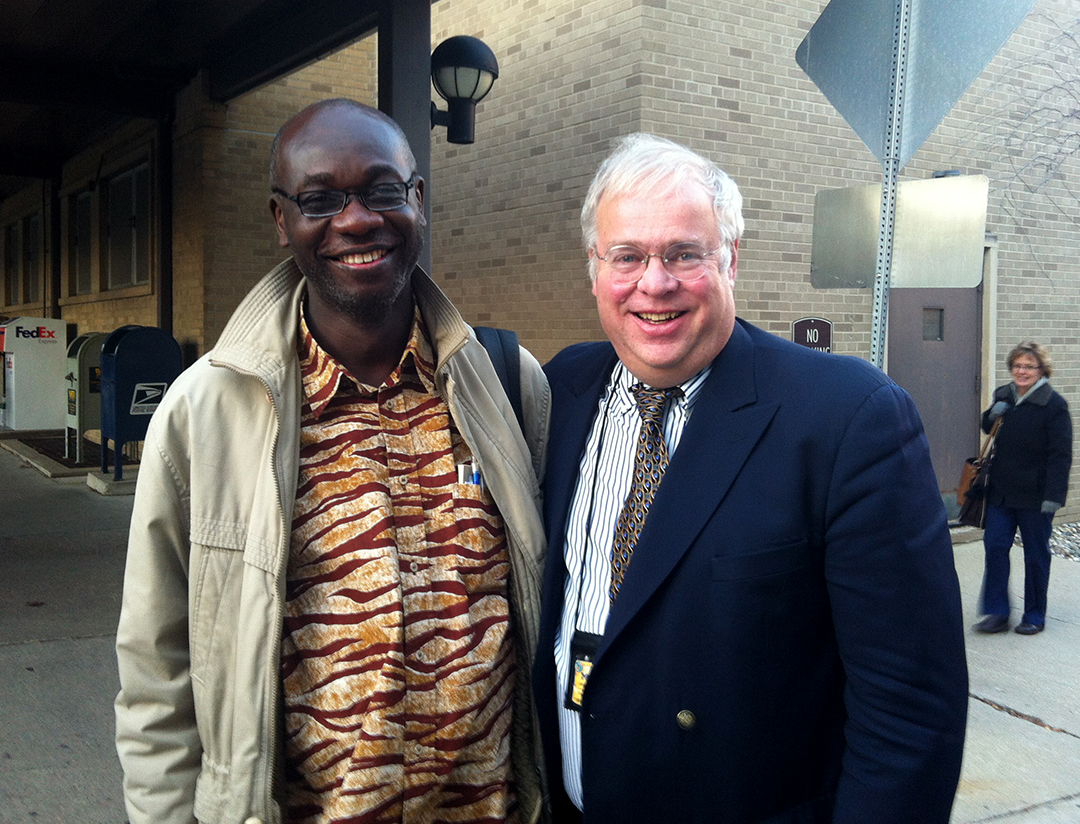 A Ghanaian physician with longstanding ties to Michigan Medicine has been named to one the country’s top medical education jobs.

Richard Adanu, MB.ChB, MPH, was appointed earlier this year as Rector for the Ghana College of Physicians and Surgeons, the nation’s first and only accrediting institution for physician specialists. An Obstetrician Gynecologist, Adanu spent three months at Michigan Medicine during residency in 2001 and has since returned to Ann Abor several times through research collaborations and training partnerships with numerous faculty members.

Formerly the Dean of the School of Public Health at the University of Ghana, Adanu assumed the GCPS Rector position in January. The post was previously held by Jacob Plange-Rhule, who was also known to many at UM and who passed away from COVID-19 in April, 2020.

“The entire UM global health community was saddened by Professor Plange-Rhule’s passing. It was loss we all felt, because so many knew and respected him,” said Joseph Kolars, Senior Associate Dean for Education and Global Initiatives. “The fact that the new Rector is someone who also has deep connections with our institution speaks to depth of our relationships there. I know others join me in wishing Dr. Adanu much success in his new role.”

Over the past three decades, the UM Medical School has been instrumental in helping Ghana establish and expand in-country training programs for physician specialists. It began with an Ob-Gyn residency program spearheaded by Michigan Medicine Professor of Ob-Gyn Timothy Johnson. That program was the first to be accredited by GCPS when the intuition launched in 2003.

“Being Rector with the Ghana College of Physicians and Surgeons is among the most prestigious jobs in the country,” Johnson said. “We are certainly proud of our affiliation with Richard. His appointment will absolutely benefit the Ghanaian health system I believe will strengthen Michigan Medicine’s partnerships in Ghana as well.”

What started with an obstetrics and gynecology training program has since expanded to other disciplines including Family Medicine, Emergency Medicine, Surgery and many others, all accredited through GCPS. Until GCPS opened its doors, Ghanaian doctors seeking specialty training had to do so outside of the country, including Adanu, who received his training at the West African College of Surgeons, in Nigeria.

“As Rector, my hope is that the partnership with UM can be further leveraged to the benefit of both institutions,” Adanu said. “UM has been very supportive of specialist training in Ghana and I believe we can keep that conversation going to continue to build the Ghana College of Physicians and Surgeons as a world-class institution. At the same time, it can provide a way by which residents and other trainees can come to Ghana to see what clinical practice is like here.”