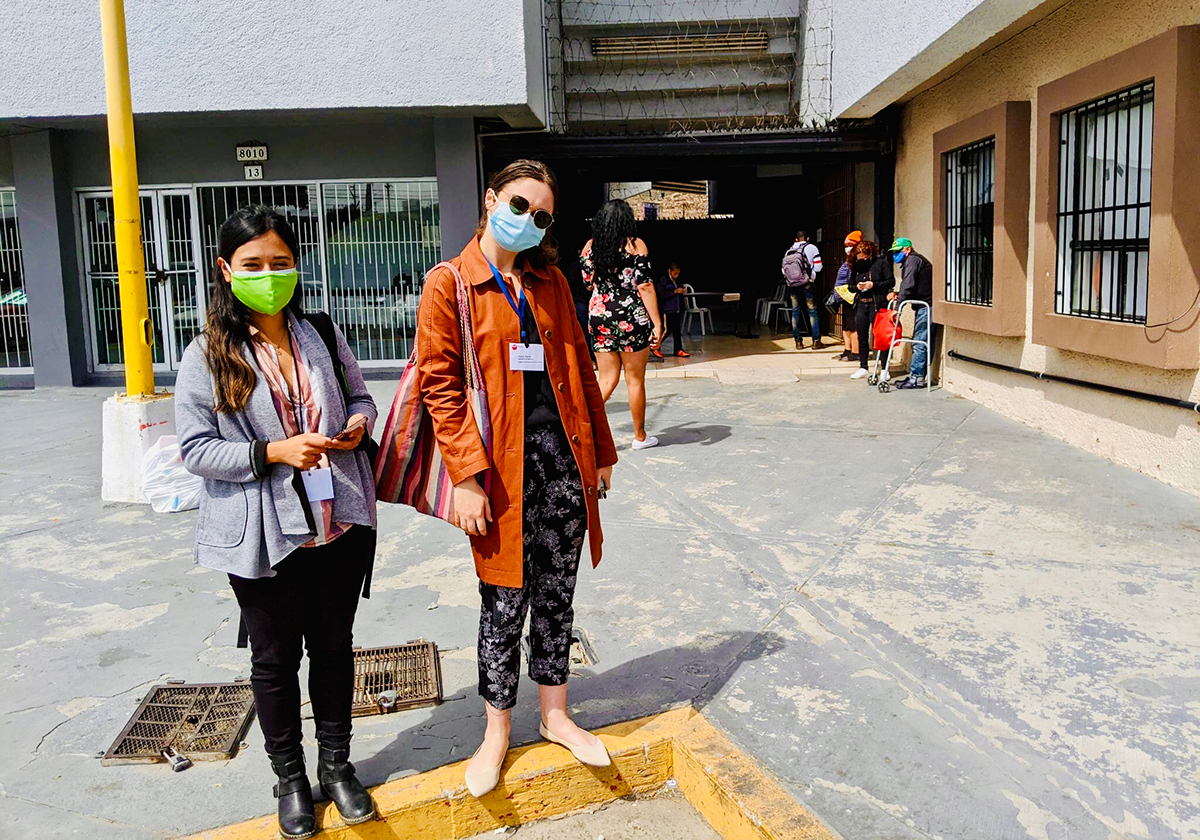 UMMS student Alana Slavin (right) and a PHR colleague in Tijuana outside Refugee Health Alliance, where the team conducted interviews with asylum seekers who have been separated from family members at the US-Mexico border.

Since Professor of Internal Medicine and Health Behavior and Health Education Michele Heisler became PHR’s Medical Director last year, one UMMS student has worked with asylum seekers at the Mexico-US border, a resident has started a project with refugee populations in the Middle East, and two other residents are planning projects of their own.

The experiment to connect U-M learners with meaningful advocacy through PHR comes at a critical time; the COVID-19 pandemic has exposed grave health disparities that – for many – emphasize the need for advocating on behalf of vulnerable populations.

“We recognize an appetite for experiences that move beyond traditional learning or academic research for a chance to make real-world impact,” said Heisler, MD, MPA. “Traditionally, there aren’t many opportunities within the curriculum for learners to directly influence policy and programs.”

Third-year Internal Medicine Resident Rayan Kaakati is working with PHR’s Middle East and North Africa branch to review the available literature on sexual and gender-based violence against men and boys at refugee camps in conflict zones. Her month-long elective will take place this fall, although she is already meeting with PHR colleagues to lay some of the groundwork.

“There is a lot of research on violence against women but for men it’s under-reported,” said Kaakati, MD. “My passion and interest is in refugee health issues, so this kind of advocacy is right up my alley. Working with PHR is a great opportunity.”

Fourth-year medical student Alana Slavin spent most of May in Juarez and Tijuana, Mexico. She met with asylum seekers who’ve been separated from family members at the US border as a result of Title 42, which called for the deportation of anyone entered the US from a country considered high-risk for COVID-19.

“I conducted interviews with a PHR colleague to document cases of family separation, the circumstances, and the mental health implications,” Slavin said. “I got a very holistic picture of how the asylum process intersects with health. At the same time, I’m able to advocate for those who’ve been excluded from society because of COVID.”

The advocacy is vital, since PHR’s outcomes move beyond research and publications. When they are finished with their literature review, Kaakati and her team plan to write a paper and ultimately produce a practical guide to help clinicians recognize the signs of sexual violence in male patients. Likewise, Slavin’s team produced a PHR report and plan to write an Op-Ed to raise awareness about family separation during the pandemic.

Helping clinicians leverage their training and voice on behalf of others is what drew Heisler to PHR. She remains on faculty at U-M and splits her time between Ann Arbor and the PHR headquarters in New York City.

“Often it’s hard as a clinician to figure out what advocacy looks like. What can you do?” Heisler said.  “Showing people that path early in their career makes a huge difference.”

Medical students wishing to learn more about educational opportunities through PHR can contact Global REACH. Post-doctoral learners should reach out through the Michigan Medicine Residents and Fellows for Global Health Equity group. Medical school leaders and PHR will evaluate next steps based on the results of this year’s pilot projects and future interest.

“While we are in the early stages, I am very enthusiastic,” said Heisler. “The key is to try to connect the experience directly to the learner’s particular clinical interest. Because PHR is engaged on so many fronts that, I think there will be opportunities to do that in ways that benefit both the organization and the U-M community.”

PHR active around the world, including advocating on behalf of health workers fighting COVID in Iraq, refugees fleeing violence in places like Syria and Myanmar, and asylum seekers at the southern US border.

“It was maybe the most impactful experience of my medical school career,” said Slavin of her month in Mexico. “It felt rewarding to have used my medical expertise in a real-world scenario and participate in something that will hopefully have an impact.”