Members of the Chinese team behind the Winter Olympics’ new helicopter medevac program consulted with Michigan Medicine’s Survival Flight leaders in the run-up to the Games. 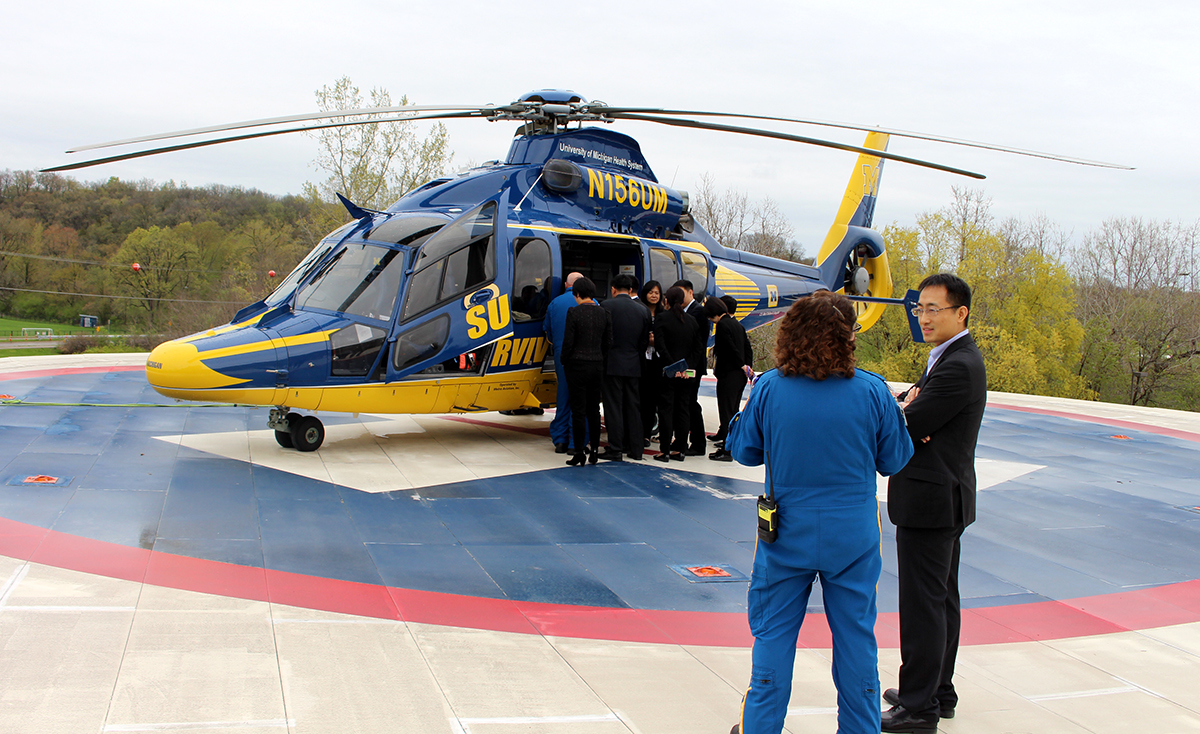 Chongli Hospital Associate Dean Yuping Yang (right) toured Survival Flight operations during a three-week visit to Michigan Medicine in 2019. After returning to China, he became part of a team charged with establishing Beijing's first-ever air ambulance ahead of the 2022 Winter Games.

Much of medical support for the Olympics, including standing up Beijing’s first-ever air ambulance service, was tasked to Peking University Third Hospital, an affiliate of longtime U-M institutional partner Peking University Health Science Center. When he was assigned to the medevac leadership team, Sports Medicine Physician Yuping Yang recalled his three-week visit to Ann Arbor in 2019 for the Global Executive Education Program, which included a behind-the-scenes look at Survival Flight operations.

Yang, Associate Dean of the new Chongli Hospital, an affiliate of the Third Hospital built near Olympic snowboarding and ski jumping venues, reached out to his Michigan Medicine friends for help. On a videoconference call in March 2021, Survival Flight physicians and administrative leaders offered advice and insights to Yang’s team.

“Chongli Hospital was built with a helicopter pad on the roof just for the transfer of patients,” Yang, MD, PhD, told his colleagues in the meeting. “We don’t have enough experience with that. That’s why we asked for this meeting. You have expertise in this area.”

During their one-hour conversation, he and his team were able to ask about training scenarios; communications logistics between the ground, helicopter and hospital teams; patient transport protocols to and from the aircraft, and more.

“We have to be pioneers in helicopter emergency transport. Here, it is an experimental step,” Yang said at the call’s conclusion. “We thank you for your hospitality and for spending time with us. Thank you so much.”

The International Olympic Committee requires helicopter medevac service to transport injured athletes if needed. Launching shortly before the Games, the program Yang’s team established services both the Yanqing zone, about 70 kilometers north of Beijing, home to the alpine skiing, bobsled and luge runs, as well as the more distant Zhangjiakou zone, about 180 kilometers from Beijing, where Chongli Hospital is located.

The new service was put to the test Feb. 7 when US alpine skier Nina O’Brien required transport from the competition site after a fall on the giant slalom course.

“Establishing a new program on such an aggressive timeline is an impressive achievement. We were happy to share our insights and experience,” said Associate Professor of Emergency Medicine and Survival Flight Medical Director Mark Lowell, MD, who participated in last year’s call. “Air transport services is a critical aspect of comprehensive emergency care, so any time we have the chance to help others get a new service off the ground, we welcome the opportunity.”