If you build it, they will train: DIY laparoscopy trainer designed for LMIC settings

Sometimes the best way to think outside the box is to just build a brand new box from scratch. 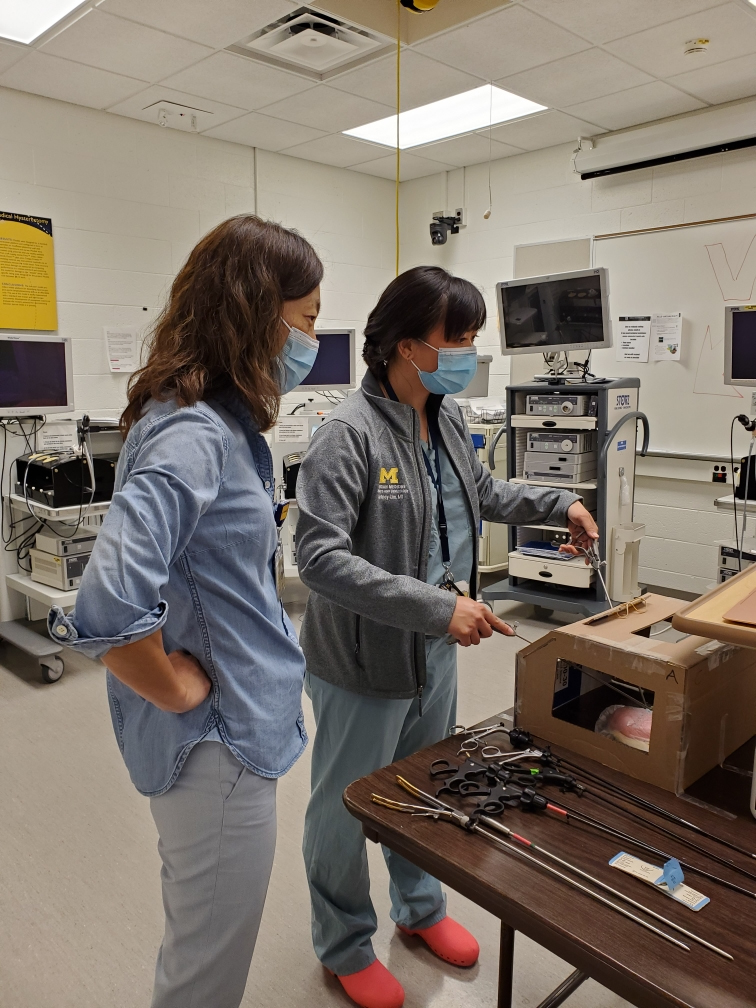 A team of U-M faculty and international collaborators is teaching laparoscopic surgery to physicians in low-resource settings using a DIY-style training simulator and web-based software to help them practice and assess their own progress.

“What’s novel about the project is how autonomous  it is,” said Associate Professor of Surgery Grace Kim, MD, a co-lead on the project. “The learners build the simulator themselves. The training platform is self-guided, and they assess one another to gauge their skills. From start to finish, it is entirely learner driven.”

Called ALL-SAFE, an acronym for African Laparoscopic Learners – Safe Advancement For Ectopic pregnancy, the project has advanced through two rounds of initial funding in the Global Surgical Training Challenge Competition. It is now among four finalists in the running for a $1 million grand prize, to be announced late this year.

At the center of the initiative is the low-cost simulator. In laparoscopic procedures, surgeons work through tiny incisions, their delicate tools outfitted with scopes and lights so they can see what they are doing on a video monitor. Simulators replicate the experience but they are costly. Rarely are they included in the equipment donations that low-resource hospitals sometimes receive, as Kim and her colleagues discovered during a needs assessment across several international sites.

“As it turns out, a lot of these systems have laparoscopic towers that have been donated or purchased. But there is no one to do this type of surgery and no equipment to train on it,” Kim said. “It’s easy to just donate the equipment. It takes a lot more investment and follow-through to have a teaching component.”

To design an inexpensive simulator, the project team turned to the biomedical engineering students in the UMMS 3D and Innovations Lab of the Clinical Simulation Center. Run by Associate Professor of Learning Health Sciences Deborah Rooney, the lab typically uses 3D printing and silicone molds. This project was different, calling upon the 3DI team to use extremely low-cost materials. What’s more, the team had to come up with a design that the trainees would ultimately be able to build themselves; they weren’t creating the simulator so much as writing a manual so others could replicate it—both the box and the organ models to in it—using stuff that was likely to be lying around: cardboard, socks, plastic bags, and so on.

“These were totally unique parameters, but we were looking to eliminate cost and shipping failure gaps that can be barriers in these settings,” said Rooney, PhD.

Her team built, tested, and refined the simulator, and then produced a set of detailed instructions to build the simulator, designed to be coupled with a smart phone (the box’s camera) and a laptop computer (the viewing screen). They even replicated the unique 30-degree camera angle common to many obstetric /gynecologic laparoscopic surgeries, including the ectopic pregnancy procedure the project team decided to focus on first. Ectopic pregnancy, the leading cause of death among women during the first trimester of pregnancy, occurs when a fertilized egg implants itself outside of the uterus.

“It’s a fairly common diagnosis that physicians in these settings are familiar with, and it is one of the more basic laparoscopic operations you can do,” said Kim. “If you’re going to learn one procedure to start with, this is a good choice.”

WATCH: A short documentary about the Global Surgical Training Challenge

The web-based training module the team designed covers ectopic pregnancy from diagnosis through surgery and recovery. Trainees practice in the box until they are proficient. Then they upload recorded video captured from their phone to the module, where fellow trainees review and evaluate the footage against a mastery checklist. That peer review is as novel in its way as the DIY simulator box—not a train-the-trainer model but rather trainee-as-trainer.

“One of the most thrilling things for me was to design it, then evaluate the quality of the assessment tools to ensure peers could successfully evaluate each other with statistical confidence,” Rooney said. “That is a big part of what makes it sustainable, but it is also tricky. This is health that we’re talking about. It’s high stakes and it had to be right. We worked very hard on that.” 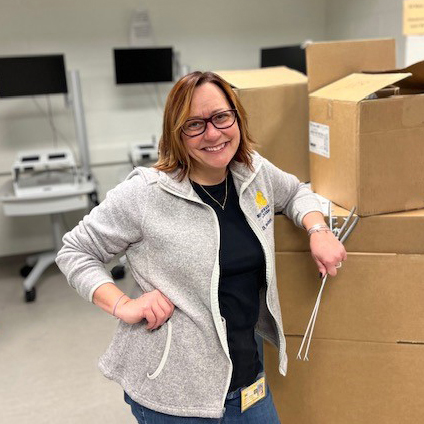 Collaborators at hospitals in Ethiopia and Cameroon are working on clinical validation, ensuring that the skills learned in the DIY box translate to the OR. At the same time, Kim and her co-leads, many of whom are engaged in the Pan-African Academy of Christian Surgeons, are in the beginning stages of designing new modules for more laparoscopic procedures, for the management of appendicitis and small bowel tumors.

Potentially winning the Global Surgical Training Challenge would be just icing on the cake, as the project will move ahead with or without the additional funding. It is notable that the entire initiative, launched amidst the COVID-19 pandemic, has been conducted virtually.

“We set out to make an impact that moves beyond one patient at a time. How can we really help our partners overseas? And how we can do it without necessarily having to be there in person?” said Kim. “I’m completely surprised that the project has gotten this far, but one of the most exciting things about this is that we’ve been able to pave the way forward by developing a nice model of collaboration.”