A fierce advocate for health equity: Brent Williams’ legacy extends into the community and around the world

Few at Michigan Medicine have engaged with, worked alongside, and accomplished more on behalf of the region’s most vulnerable than Dr. Williams, founding Director of the Global Health and Disparities Path of Excellence. 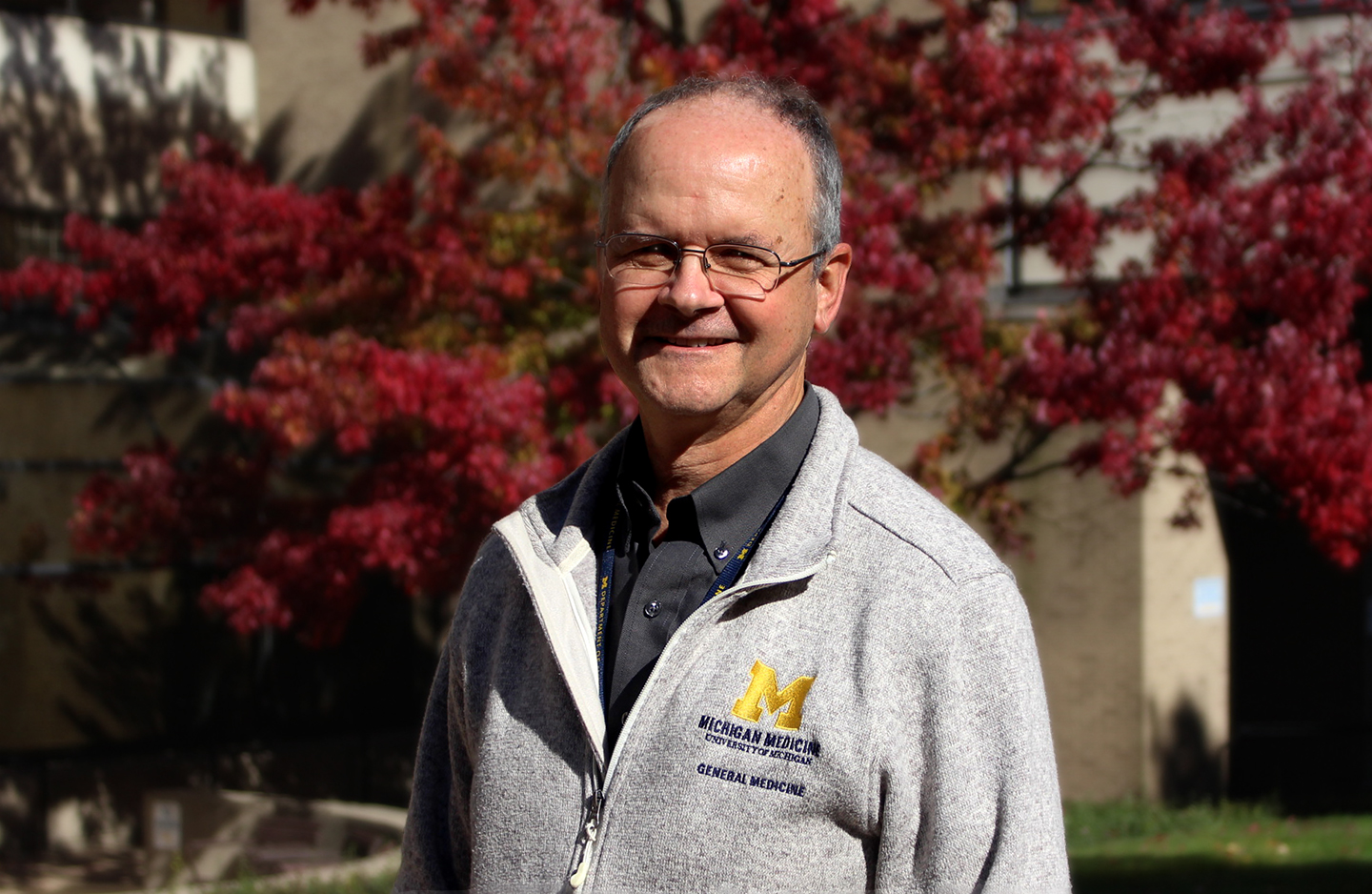 Professor of Internal Medicine Brent Williams, has been recognized by the department with a lifetime achievement award for his work and advocacy on behalf of vulnerable patients.

In the spring of 2020, as COVID-19 swept the country, there were many people in disparate settings to worry about: kids in schools; colleagues in offices; patients in hospitals. There were endless headlines about safety in restaurants, on airplanes, in churches.

Comparatively little public discussion was focused on homeless shelters, even though close quarters and the transient nature of the population made their clients particularly susceptible. But in Washtenaw County, a small group of community leaders, including Dr. Brent Williams, convened early and often to ensure that the shelters were not overlooked.

“Brent was instrumental in helping us think through our pandemic response,” recalled Daniel Kelly, Executive Director of the Washtenaw County Shelter Association. “It required an unprecedented level of cooperation between our teams and the hospitals and clinics, and Brent seemed to know everyone, not just at U-M but across the community. No matter what issues arose, he knew exactly who we needed to bring in.

“The stakes were very high, and it is not an exaggeration to say that the effort literally saved lives,” Kelly said.

That Williams, a longtime UMMS Professor of Internal Medicine, should find himself at the center of such an effort is no surprise. Few at Michigan Medicine have engaged with, worked alongside, and accomplished more on behalf of the region’s most vulnerable. From his early work and research on behalf of seniors, to complex care efforts strengthening coordination between healthcare and social services teams, to work engaging students firsthand in health equity issues at home and abroad, Williams has made an indelible impact at UMMS and the surrounding community. He was recently recognized with a lifetime achievement award by his department and has begun a phased retirement which will find him stepping back by 2025.

“For as long as I’ve known him, Brent has been a fierce advocate for community engagement, pushing the Medical School and University to get more involved,” said Rajesh Mangrulkar, MD, Margeurite S. Roll Professor of Medical Education, and a longtime colleague. “That isn’t necessarily how the University has always been oriented, but Brent is relentless in advocating for the institution to do more.”

Williams was always driven to do more – both for his patients, and for the system on which they depend for their care. During residency at the University of Virginia, he made of habit of going on house calls for his older patients, even though it was not a program requirement. “I just went out and did it,” he said. “They were vulnerable. It felt like I could do some fundamental good.”

Following residency, he obtained a master's in health policy at Harvard and arrived at U-M shortly after in 1989. Williams initially focused on geriatrics, pairing elder-care services research with educational programs that expanded geriatrics training beyond internal medicine into departments like gastroenterology and emergency medicine.

At the same time, he sought out opportunities to get involved with the region’s homeless population. In 1990, he co-founded a weekly health clinic at the Delonis Center, Washtenaw’s primary shelter, seeing patients there himself and recruiting other U-M colleagues to help. It was all in addition to his regular teaching and administrative duties.

“It was always extramural at first, while he worked to get the institution to recognize that it was important,” said Jack Billi, an emeritus professor of public health, medicine and engineering, and a longtime colleague. “If you look at Brent’s CV, you’ll find that many of the titles he’s held, he was the first person to have that job. He didn’t wait until there was a structured role. It was just, ‘By the way, I’m doing this because somebody should.’”

By the mid-2000s, Williams had developed such an extensive network across Washtenaw County’s social services programs that Billi, then Associate Vice President for Medical Affairs, supported Williams in serving as the first-ever UMHS Liaison for Special Populations. Under Williams’ direction, UMHS soon launched the Complex Care Management Program, which targeted patients with the most complicated needs for hands-on case management, ensuring continuity and coordination of care across healthcare, mental health, and social services providers. 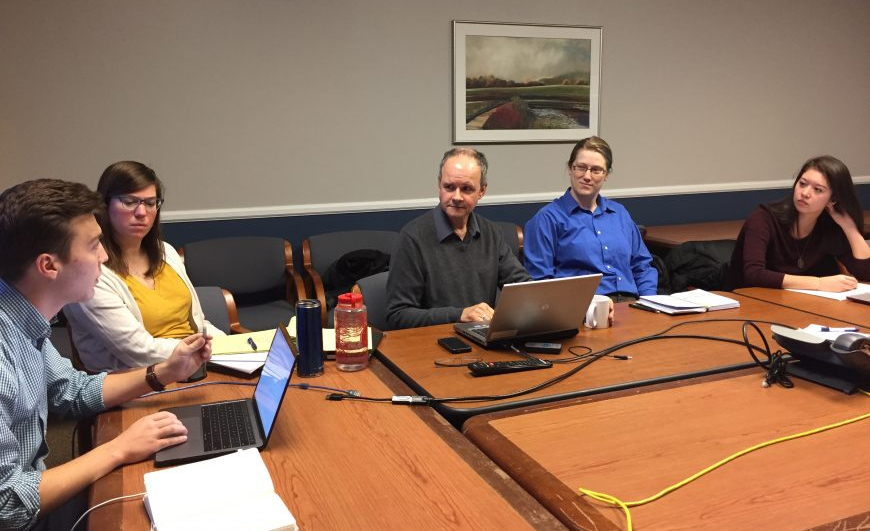 Dr. Williams with UMMS students and U-M colleagues in a Complex Care team meeting in 2017.

Initially co-funded by the state and the institution, and later supported by federal grants, the program demonstrated both improved patient outcomes and cost savings, since it kept people out the ER. Many were patients of Williams, people whose health problems were typically exacerbated by substance abuse, mental health issues, and socio-economic challenges.

“Brent and I cross-covered each other’s patients for decades. I always prided myself on treating a fairly complex population, but my cases were nothing compared to Brent’s,” Billi said. “Among Brent’s chief contributions is developing a framework connecting these folks to the social services they need and making sure the care team is part of that holistic system.”

When the Affordable Care Act provided an opportunity to extend the idea of Complex Care further, Williams was there. He was chosen among the University’s first representatives for the Washtenaw Health Initiative (WHI), a group of influential leaders from various organizations assembled in 2010 to determine how the system could best prepare for the influx of new Medicaid-eligible patients.

Once on the committee, Williams used his influence to make sure others had a voice. He helped guide the group to take on a wide variety of projects focused on the underserved, far beyond ACA enrollment.

“Brent emerged as a real leader of equity efforts in the WHI, reaching out to vulnerable members of the community and creating space for them to share their views and talk about their lived experience with us,” Billi said. “He helped that group commit itself early on to racial equity aspects, and everything we did at WHI from that point was going to be through a health equity lens.”

Williams remains involved in WHI and is set to become co-chair of the organization’s overall steering committee this fall, a position he will share with Sharon Moore, a retired UAW representative, Packard Health board member, and a longtime community advocate.

“When you are around Brent, you learn that it is ok to say, ‘I don’t know about that. Can you explain that to me?’ And then to listen – really, truly listen – to how people answer,” Moore said. “I am so grateful he has decided to be co-chair and I am excited for the work we’ll be able to do together.”

A return to global health 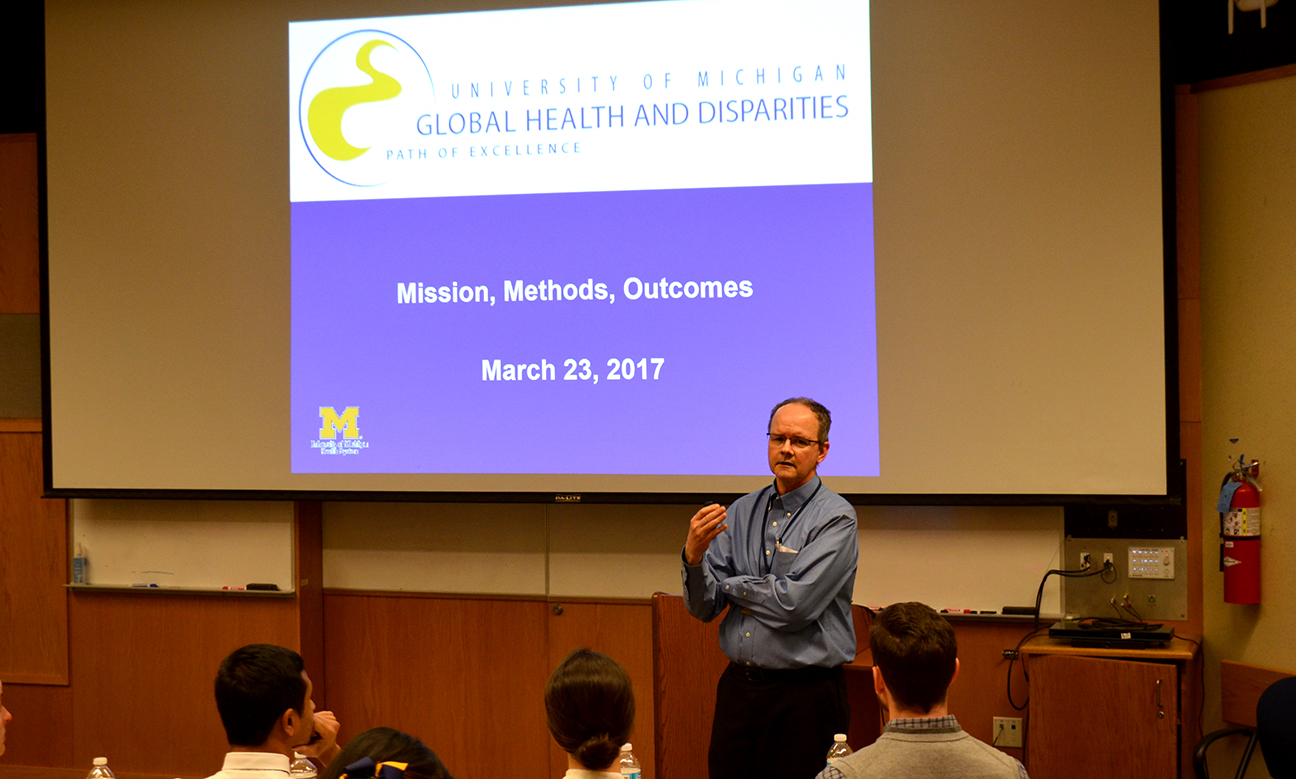 Leading a meeting the Global Health and Disparities students.

For Williams, it has never been enough to get personally involved in improving the system for his patients. He has looked for ways bring others along as well. At UMMS, that meant engaging with students in his role as the founding Director the Global Health and Disparities (GHD) Path of Excellence.

It was another first-of-its-kind role that fit Williams perfectly. He had spent time in India as an undergraduate philosophy student; it was where he decided to become a doctor. (He had been considering philosophy or the clergy.)

“I remember the moment, sitting in the ante room with my Indian family, that it sort of hit me: I like science, I like people, and medicine had the potential for broad impact, which appealed to me,” Williams said. “All the way through medical school, my intention had been to pursue a career along the lines of what is now called global health.

“I sort of made a U-turn along the way to domestic disparities,” he continued.  “What GHD did for me was provide the chance to circle back to global health. I have been so grateful for that opportunity.”

GHD launched in 2012, the first of eight Paths of Excellence. It remains incredibly popular among students; of nearly 600 UMMS students currently enrolled in Path, a full third are in GHD. That’s in addition to the 150-plus GHD students who have already graduated.

Those students have engaged in health equity projects around the world and closer to home, working to bolster diagnostic laboratory testing in Ghana, examining cesarean procedure outcomes in Kenya, assessing the mental health needs of immigrants in southeast Michigan, and more. Under Williams’ leadership, these projects are carried out through a lens of cultural humility with consideration for the partner institutions’ needs and contributions.

“Dr. Williams has extended his legacy through GHD, ensuring that many of our students will carry the values that he exemplifies into their own careers wherever choose to practice,” said Senior Associate Joseph Kolars, MD, MACP, who helped launch the Paths program. “In all my years at U-M, I can’t think of another provider who has so greatly impacted the lives of the most vulnerable in our healthcare system.”