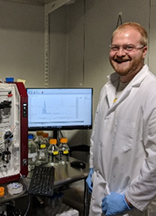 In the broadest sense, Baldridge’s lab studies protein quality control at membranes. Right now, we are focused on a Hrd1 centric endoplasmic reticulum-associated degradation (ERAD) using Saccharomyces cerevisiae as a model. The majority of eukaryotic integral membrane proteins initially integrate into the ER membrane. These proteins do not always reach their final folded state and are disposed of by ERAD. The importance of this system is underscored by clear evidence that accumulation of misfolded proteins can lead to various diseased states including Huntington’s, Parkinson’s, Alzheimer’s, and diabetes. My current project is using a reverse genetics screen and total mutational analysis Hrd1 to determine critical residues involved in function. Hrd1 is an E3 ubiquitin ligase that ubiquitinates ERAD substrates for degradation and functions as a channel that moves substrates from the ER lumen to the cytosol (called a retrotranslocon).