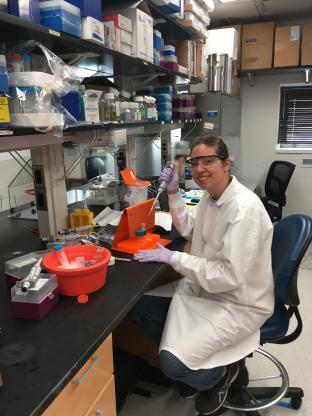 My long-term scientific goal is to investigate the mechanisms of gene regulation within complex diseases. One complex disease, type 2 diabetes (T2D), is characterized by dysfunction of the pancreatic islet beta cells which leads to problems in glucose-sensing and insulin-producing pathways. As a complex disease, T2D arises from the combined effects of genetic and environmental factors. Genome wide association studies (GWAS) of T2D have already identified over 400 independent genetic signals linked to the onset of the disease. The majority of these lead single nucleotide polymorphisms (SNPs) localize to non-coding regions of the genome and individually have small effects. It is likely that these loci map to regulatory regions of genes that impact the development of T2D. Many of these regulatory elements are cell-type specific and are active only within specific tissues, often the pancreas. Similarly, the local environment of the cell likely plays a role in the genetics of T2D. Therefore, in order to fully understand GWAS findings and develop personalized treatments for T2D, specific cell states must be investigated for their impact on gene expression and regulation. Investigating the transcriptome and epigenome under these conditions and comparing them to existing T2D GWAS data would give insight into disease pathways as well as the effect of cell states on genetic mechanisms. My work involves examining the mechanisms of gene regulation under specific cell states of pancreatic-islet beta cells, and how this relates to previously known T2D disease pathways.