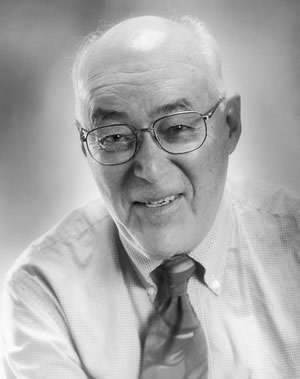 Myron Levine joined the Department of Human Genetics as Associate Professor in 1961 and remained active in the department for more than 50 years. He was deeply committed to our academic missions of education and research, and made invaluable contributions to the life of the Department.

Mike earned his BS in Biology and Biochemistry at Brooklyn College in New York City in 1947. A summer undergraduate research program at Cornell University in Ithaca influenced his choice of a career in genetics. A faculty advisor at Brooklyn encouraged him to apply to graduate school at Indiana University in Bloomington, which was then at the forefront of genetics research. Mike carried out his thesis research with Tracy Sonneborn on paramecium genetics. His teachers included future Nobel laureates Salvador Luria, Renato Dulbecco, and Herman Muller, and James Watson was a fellow graduate student. Later, as a postdoctoral fellow with Luria, Mike attended the famed meetings of the Phage Group at Cold Spring Harbor Laboratory in the 1950s and 60s. The accommodations at the Laboratory at that time were primitive but the intellectual atmosphere was rarified, and the Levine family spent several memorable summers there.

The early work in Mike’s laboratory in Michigan focused on the genetic regulation of lysogeny in bacteriophage P22, which has a genome of 44 kb encoding 64 genes. With postdoctoral fellow Hamilton Smith, he used pulsed–labeling to identify the sequential activation and repression of phage genes during the establishment of lysogeny, work that was published in Science and was considered by Mike as some of his best. Smith’s recollection of his years in Mike’s lab can be heard in an interview at the Cold Spring Harbor Laboratory Oral History web site. Ph. D. student David Botstein used temperature-sensitive phage mutants to dissect the intermediates in phage replication. The lab also carried out cell-free assembly of pre-formed tail-less heads and head-less tails into active phage. Mike reviewed this work in an article on Phage Morphogenesis in the Annual Review of Genetics, volume 3, 1969, that reads well today.

In the 1970s and 80s, Mike applied similar logic to dissect the process of latent infection by Herpes virus, which has a 150 kb genome encoding 100 genes. With students and postdoctoral fellows Fred Homa, Roz Sandri-Goldin and Al Goldin, the laboratory studied viral replication and the establishment of latency. In an interdisciplinary collaboration with neurologist David Fink and virologist Joe Glorioso, this virus was developed as a carrier for gene therapy, taking advantage of the natural tropism of the virus for neuronal ganglia. This work was continued in the Fink and Glorioso laboratories, recently resulting in the delivery of the human proenkephalin gene for treatment of chronic pain by administration of herpes virus through the skin (Ann. Neurol. 2011). More than 25 years after initiation of this work, clinical trials are now in progress.

Mike was a citizen of the world, and enjoyed sabbatical research and collaborations with colleagues in London, Paris, Geneva, Rehovoth and Cambridge. Several of his trainees achieved eminent positions in academic research, including Hamilton Smith, who received the Nobel Prize for work on type II restriction endonucleases, David Botstein, a leader in the field of genomics and Chair of the Genetics Departments at Stanford and Princeton, Alan Goldin, Associate Dean for Academic Affairs at UC Irvine, and Roz Sandri-Goldin, Chair of Microbiology & Molecular Genetics at UC Irvine.

Mike was a founder of the Graduate Program in Cellular and Molecular Biology, and was the Director of CMB from 1974 to 1990. The program was initiated to provide a meeting ground for faculty scattering among different departments across the campus who had overlapping research interests in the rapidly developing fields of cellular and molecular biology. The continuing success of this program over nearly four decades is a confirmation of the vision of its founders. During his long tenure as Director, Mike was known for his sensitivity to the needs of CMB students, and his wise counsel helped many students overcome personal and academic difficulties to succeed in the program.

In addition to his contributions to education and research, including publication of more than 120 articles, Mike served the scientific community on editorial and review panels, as Editor of the Journal of Virology, and member and chair of the NIGMS committee on the Genetic Basis of Disease. He was Acting Chair of the Department of Human Genetics for 3 terms and was honored with the UM Distinguished Faculty Achievement Award, the Distinguished Biomedical Lecture, and the Annual CMB Myron Levine Lecture. He served as a member of the Raoul Wallenberg Executive Committee for more than 20 years.

Mike was greatly valued by his faculty colleagues. At faculty meetings in the Department of Human Genetics, his was a voice of reason – clear, insightful, dispassionate and humane, a model of the academic virtues. People leaned forward to hear his quiet, measured contributions. Mike and Bobbie hosted many department gatherings with their warm and generous hospitality. After his retirement in 1996, Mike remained active as an Emeritus Professor, continuing to participate in many Human Genetics functions. For more than 50 years, Mike Levine contributed to the quality of academic life in our department. He will be long remembered, and greatly missed. Mike is survived by his wife of 62 years, Bobbie, his daughter Sura, Professor of Art History at Hampshire College, his son Peter, Executive Director of the Genesee County Medical Society in Flint, his daughter-in-law, Marion Day, and his grandson Evan.