Dr. Omenn has been professor of internal medicine, human genetics, and public health at U-M since 1997. He also directs the university-wide Center for Computational Medicine and Bioinformatics, founded in 2005, and leads the global Human Proteome Project. From 1997 to 2002, Dr. Omenn was CEO of the U-M Health System and executive vice president for medical affairs. He led the integration of the medical school, hospitals and health centers, and M-Care HMO to create an academically strong, patient-centered, financially stable U-M Health System.

A leader on the national stage, Dr. Omenn has held high-level government appointments during the administrations of Presidents Nixon, Ford, Carter, Reagan, Clinton, and Obama. “In the mid-1990s, he chaired the Presidential/Congressional Commission on Risk Assessment and Risk Management, called the ‘Omenn Commission,’ with an enormous impact on the work of regulatory and public health agencies,” says Dr. Ginsburg. In 2004, Dr. Omenn received the John W. Gardner Legacy of Leadership Award from the White House Fellows Association.

Dr. Omenn has served on advisory boards for the National Institutes of Health (NIH), the National Academies, the IOM, Centers for Disease Control and Prevention, and The Hastings Center. Dr. Omenn conducted extensive research on proteins at Princeton University, Harvard Medical School, and the NIH. As a fourth-year medical student, he reported in the New England Journal of Medicine a kindred with reticuloendotheliosis, later named Omenn syndrome. He launched his faculty career in medical genetics in 1971 at the University of Washington (UW). Dr. Omenn was the founding director of the UW Robert Wood Johnson Clinical Scholars Program, through which he interacted with Dr. Rogers. He was simultaneously a Howard Hughes Medical Institute investigator.

By 1979, Dr. Omenn was professor of medicine. He served as dean of the UW School of Public Health and Community Medicine from 1982 to 1997, created the UW-wide Institute on Public Health Genetics, and was principal investigator for the beta-Carotene and Retinol Efficacy Trial (CARET) against lung cancers in high-risk populations.

Dr. Omenn received his A.B. degree from Princeton University, M.D. degree from Harvard Medical School, and Ph.D. in genetics from the University of Washington.," 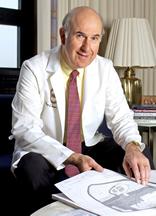