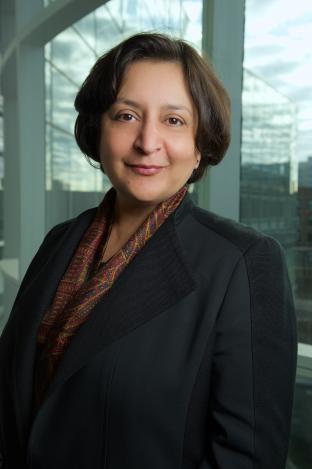 After finishing residency training in Anatomic Pathology at the Brigham and Women’s Hospital (BWH)/Harvard Medical School, Asma completed a fellowship in Gastrointestinal and Hepatobiliary pathology, as well as a research fellowship in epithelial pathobiology at the same institution. While at BWH, she began investigating fundamental mechanisms of epithelial barrier regulation and wound repair. She remained at BWH as a faculty from 1992-1997, after which she was recruited to Emory University where she rose to the rank of full Professor. After receiving a Career Development Award and an RO1, Asma has been continuously funded by multiple grants from the NIH and private foundations. In 2015 she was recruited to the University of Michigan Medical School as the Aldred Scott Warthin Professor and Director of Experimental Pathology.

In the laboratory, Asma has had a long standing interest in elucidating the pathologic mechanisms of inflammatory bowel disease. She has published more than 150 scientific manuscripts, many in high profile journals such as J Clin Invest, Proc Nat Acad Sci, J Exp Med, Immunity, Mucosal Immunology, Gastroenterology, and Mol Biol Cell, and is a regularly invited speaker at international symposia related to his field. Asma is also a practicing Gastrointestinal and Liver Pathologist and has contributed to mentoring and teaching graduate and medical students, residents, postdoctoral fellows and junior faculty. She is an Associate Editor for Molecular Biology of the Cell and Gastroenterology.

Clinical Subspecialty: Gastrointestinal and Hepatobiliary Pathology
Research Subspecialty: Mucosal Inflammation and Epithelial Pathobiology
The pathogenesis of gut mucosal inflammatory conditions involves the combined dysfunction of the mucosal barrier and local immune responses to gut luminal contents. Our research has been focused on understanding mechanisms that control intestinal epithelial homeostasis, barrier regulation, resolution of inflammation and repair after injury. Over the past two decades we have contributed to identifying regulatory proteins that control Apical Junctional Complexes (AJC) and epithelial barrier function. We have demonstrated association of intercellular junction proteins with specialized cholesterol and glycosphingolipid-enriched membrane rafts, and provided some of the first evidence that AJC proteins utilize specific endocytic pathways for junction remodeling. These reports set the stage for ongoing studies that address remodeling and regulation of epithelial intercellular junction proteins during mucosal inflammation. In addition to investigations directed at understanding the fundamental relationships between epithelial homeostasis and mucosal inflammation, we are investigating molecular mechanisms that orchestrate mucosal wound repair. These studies include elucidation of pro-repair/pro-resolving factors released by inflammatory cells in wounds that signal via G-protein coupled receptors to promote epithelial cell migration, proliferation and ultimately wound repair. Currently we are investigating the role of formyl peptide receptors and CMKLR1 in orchestrating intestinal mucosal wound repair.